What: Etsy (NASDAQ:ETSY) shares slid 16% during the month of June, according to S&P Capital IQ data. This continues a steep downtrend which has characterized the stock since its April 16 initial public offering (IPO). Etsy shares have lost 55% since their first day of trading: 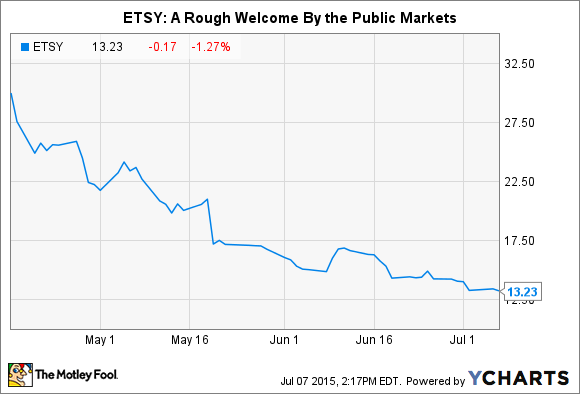 So What: June's descent was a continuation of selling activity exacerbated by a lack of positive news or counter-narrative to recent events.

Pressure on shares of the online crafts marketplace began in earnest just weeks after its IPO, when analysts from Wedbush Securities published an analysis claiming that up to 2 million items on Etsy's site were potentially counterfeit or represented copyright or trademark infringements. This number represents roughly 5% of the merchandise available for sale on Etsy.

In the latter half of May, Etsy reported Q1 2015 earnings -- its first quarter of earnings as a public company. To the surprise of some analysts and many investors, the company posted a substantial loss of $36.6 million, although revenue did increase 44% over the prior-year quarter, to $58.5 million.

Clouding visibility for the rest of the year's earnings, management stated during the company's earnings call with analysts that it believed a strong U.S. dollar was dampening demand for its products by overseas buyers. It also indicated in its earnings press release that foreign currency weakness could continue to impact global appetite for its products. The non-U.S. portion of Etsy's Gross Merchandise Sales, or GMS, remained flat during the quarter, at 30.5% of total GMS. GMS represents the dollar amount of sales in Etsy's marketplace, from which the company deducts transaction fees and records its own revenue.

Additional uncertainty hit when Amazon.com announced a new service in late May targeted squarely at Etsy: "Amazon Handmade." Amazon's version of a crafts marketplace has several advantages for sellers considering defection, the biggest being the 250 million-strong Amazon customer base, which represents a potential market 12 times the magnitude of Etsy's 20.8 million active buyers. Amazon's entry into the handmade goods market, once thought to be Etsy's niche, clearly has investors questioning the company's growth assumptions.

Now what: The current narrative around Etsy isn't completely one of gloom. For example, Etsy improved its gross margin by 260 basis points during the first quarter, from 62% to 64.6%. In addition, higher-margin revenue streams such as the company's "Promoted Listings" service are starting to outpace the growth of lower-margin revenue streams.

For now, however, caution will probably be foremost in investors' minds, and any such bright spots will be overlooked until earnings exhibit decent strength, and the threat from Amazon can be more clearly assessed.