Please ensure Javascript is enabled for purposes of website accessibility
Log In Help Join The Motley Fool
Free Article Join Over 1 Million Premium Members And Get More In-Depth Stock Guidance and Research
By Lee Samaha - Updated Oct 5, 2018 at 8:04AM

FedEx CEO Fred Smith's idea of creating an overnight delivery company has stood it in good stead in recent years.

All great corporations have great men behind them who shape the management philosophy of the company, and there is no doubt who it is at FedEx Corporation (FDX 0.63%). Founder, Chairman, President and CEO Fred Smith created the company in 1971 and his influence can be directly seen in the ongoing operations of the company today. With this in mind, let's take a look at Smith's development of FedEx and why it may have led to the company outperforming its rivals in the last few years. 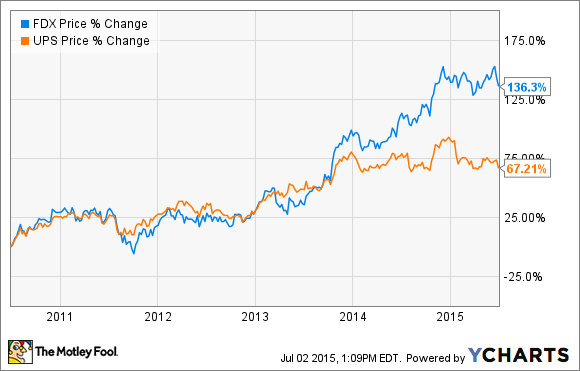 FedEx Corporation outperforming its peers
The history of Fred Smith's creation of FedEx Corporation (originally called Federal Express) has entered U.S. corporate lore. From the term paper he wrote on the possibility of an overnight delivery service to the winning hands of blackjack in Las Vegas that helped support the company's finances in the early days, Smith's meteoric rise has also captured the attention of the wider public.

However, perhaps the most interesting aspect of his tenure -- at least from an investor's perspective -- comes from the fact that FedEx has dealt with peak demand during the Thanksgiving to Christmas period better than its key rival United Parcel Service (UPS 0.98%). Is this a coincidence, or is it something to do with the structure of FedEx under Fred Smith's leadership?

It's an important question, because as you can see in the chart above, FedEx investors have been richly rewarded for the company's corporate outperformance in the last couple of years.

Structurally better?
As noted above, the last two holiday seasons have been harder on UPS than FedEx. A combination of the harsh winter of 2013/2014 and a strong rise in peak demand due to increased e-commerce deliveries hit profits at both companies. But FedEx came out of it relatively better.

Fast-forward to the 2014/2015 holiday season and, once again, UPS was forced to warn on profits due to failing to efficiently deal with e-commerce demand. Meanwhile, FedEx reported a "very successful peak season" and its full-year earnings (to the end of May 2015) were in line with management's expectations.

The structure of our operations with separate air and ground networks provides us a very unique advantage. And our ability with our solutions team working with our operating companies and very closely with our customers did a phenomenal job adjusting our networks and operations to take advantage of the opportunities and provide outstanding service.

Indeed, Smith made the same argument when outlining why FedEx outperformed UPS in 2013 as well. Keeping the airfreight network separate is a consequence of the emphasis on express deliveries at FedEx.

A blessing in disguise
FedEx's structure is a legacy of the origins of the company that Fred Smith created. As the original name "Federal Express" suggests, the company was originally set up to offer overnight package deliveries for corporations (overnight document delivery would be offered later in the 1970s, when regulations permitted it). However, the emphasis on express deliveries has proved a double-edged sword.

On the one hand, having separate air and ground networks is, arguably, one of the reasons that FedEx has traditionally had lower operating margins than UPS. For example, in a recent presentation, UPS outlined the following operating margin performance for small packages (e-commerce business-to-consumer packages tend to be of this genre) across the industry.

In addition, it created the need for FedEx to undertake significant restructuring and cost-cutting after the recession, as the market shifted toward slower, lower-cost deliveries.

On the other hand, it appears to have better positioned FedEx to deal with peak conditions during the holiday season. As you can see in the chart below, FedEx has seen a notable shift in how it generates earnings in recent years. 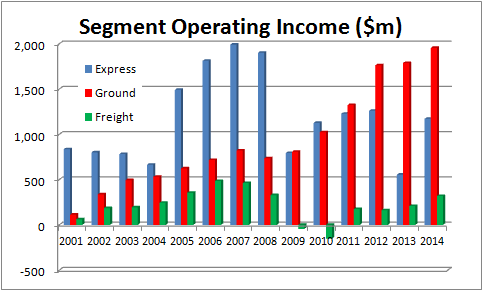 At this point, it's worth noting that investors usually shouldn't be buying the more productive company per se, but rather buying based on the earnings, and earnings quality, of the company. In other words, it doesn't matter if UPS has higher margins if FedEx is going to be able to generate more earnings in the future thanks to the favorable structure of its networks.

Indeed, the market has warmed to FedEx's outperformance during peak season and the success of its cost-cutting measures at Express: FedEx is now on track to generate $1.6 billion in profit improvements by 2016, thanks to cost-cutting at Express.

The bottom line
Fred Smith originally structured FedEx to deliver overnight deliveries, and the emphasis on maintaining separate airfreight and ground networks has served the company well in the last two holiday seasons. If this edge proves lasting, then the quality of earnings at FedEx may turn out to be better than its rivals', such as UPS.

Lee Samaha has no position in any stocks mentioned. The Motley Fool recommends FedEx and United Parcel Service. Try any of our Foolish newsletter services free for 30 days. We Fools may not all hold the same opinions, but we all believe that considering a diverse range of insights makes us better investors. The Motley Fool has a disclosure policy.