Please ensure Javascript is enabled for purposes of website accessibility
Log In Help Join The Motley Fool
Free Article Join Over 1 Million Premium Members And Get More In-Depth Stock Guidance and Research
By Andrés Cardenal - Jul 10, 2015 at 8:05AM

Nike is firing on all cylinders on the back of undisputed fundamental quality and rock-solid financial performance. However, the valuation is getting stretched.

Nike (NKE 1.50%) stock is doing remarkably well. Shares of the sports apparel leader are up by more than 40% in the last year, comfortably beating the S&P 500 and its much smaller gain of less than 5% over the same period. Nike is a remarkably strong business, and the latest financial report confirms that it keeps advancing in the right direction. On the other hand, the valuation is getting quite stretched as Nike stock continues to log new all-time highs.

Running ahead of the pack
Nike comes second to none in the global sport shoes and clothing industry. The company is a formidable marketing machine, and the Nike swoosh is one of the most popular and recognized corporate logos around. Nike also benefits from unparalleled global scale and abundant financial resources to invest in areas such as marketing and R&D.

These competitive strengths have allowed Nike to expand into different markets and sport disciplines over the last several years, and the company is making big inroads in categories such as soccer, where it used to come behind its European competitors just a few years ago. Besides, its rock-solid pricing power means profit margins are well above industry standards.

The company reported a healthy increase of 10% in total sales during the fiscal year ending May 31st, reaching $30.6 billion. Sales in constant currency grew by an even stronger 14%, with regions like Western Europe and Greater China delivering big increases of 21% and 19% in constant currency sales, respectively.

Nike realized higher average selling prices during the year, and the direct to consumer segment was a major growth driver, with constant currency sales in this division growing by 29% year-over-year. These factors allowed Nike to produce expanding profit margins, as its gross margin increased from 44.8% of sales in fiscal 2014 to 46% of revenue during fiscal 2015.

Earnings per share increased 25%, which is nothing short of extraordinary for a company as big as Nike. In addition, management returned $3.4 billion to investors via dividends and buybacks during the year, so the company is clearly translating its fundamental quality into solid financial performance and big cash distributions to shareholders.

The smart way to play Nike stock
The biggest drawback when it comes to investing in Nike stock is its valuation. The company is priced for demanding expectations, and this is always an important source of risk to watch in case the company encounters any bumps down the road, and performance turns out to be a disappointment over the coming quarters.

The price-to-earnings ratio is currently above 30 times, a big premium versus the average company in the S&P 500, which trades at around 19 times. Nike can easily justify an above-average valuation, and the stock has admittedly delivered big gains while trading at a premium over the years.

Still, current valuation levels look quite aggressive. When comparing indicators such as price-to-earnings, forward price-to-earnings, enterprise value-to-EBITDA, and price-to-cash flow from operations, these multiples are all near the top end of their historical ranges for the last decade. 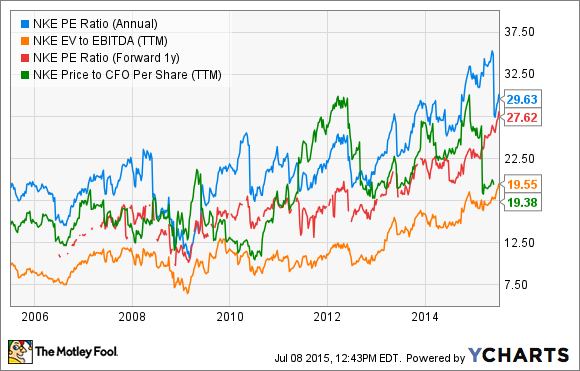 This does not mean Nike stock is due for a correction, but patience looks like the way to go when building a position in the shares. This is a top-quality business to own for the long-term, but there is no reason to rush into building a position at current prices.

A better approach could be to buy in different stages -- for example, in thirds. This would mean buying a third of your intended position at current levels and waiting for a better entry price for the remaining two-thirds.

When making an investment decision, there are two big questions to answer: what to buy and when to buy it. Nike leaves little room for doubts when it comes to business quality and fundamental strength, so it is a solid yes on the first question. When it comes to timing, however, current prices do not look particularly attractive.

Andrés Cardenal has no position in any stocks mentioned. The Motley Fool recommends Nike. The Motley Fool owns shares of Nike. Try any of our Foolish newsletter services free for 30 days. We Fools may not all hold the same opinions, but we all believe that considering a diverse range of insights makes us better investors. The Motley Fool has a disclosure policy.