What: Shares of Sierra Wireless (NASDAQ:SWIR) fell 18.3% in the month of June, according to S&P Capital IQ data. Shares of the "Internet of Things" pure play have continued to decline so far in July as of this writing, leaving it more than 50% below where it started at the beginning of 2015.

Despite this woeful drop, however, note Sierra Wireless stock is still up almost 17% over the past year, and has managed to even outperform the S&P 500 over the same period: 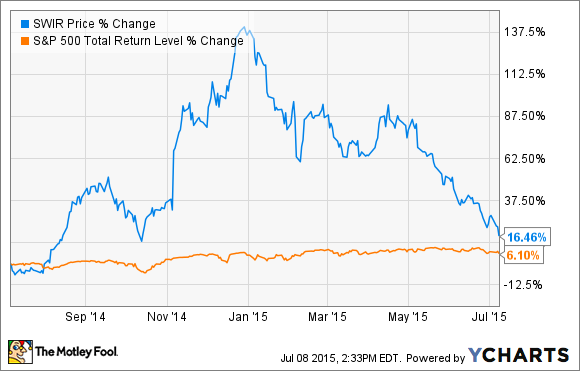 So what: That's little solace to investors who've endured this roller coaster or bought near the top. And based on the chart above, the biggest chunk of this year's declines followed what appeared to be a solid earnings report from Sierra Wireless in early May. At the time, the company exceeded analysts' expectations on both revenue and earnings, but left investors wanting more by issuing conservative guidance for the current quarter. For that -- and keeping in mind Sierra Wireless has a history of under-promising and over-delivering -- Sierra Wireless blamed a combination of its enterprise segment performing below expectations, as well as supply constraints in RF components that both hurt revenue and resulted in added costs to "design in" more expensive replacement components.

Since then, there's been a relative absence of significant company news; Sierra Wireless issued press releases for a handful of new products, closed on its previously announced acquisition of Accel Networks, a 4G LTE managed connectivity solutions provider for distributed enterprises, and announced a comparatively small acquisition two weeks ago of another managed connectivity services company called MobiquiThings.

In short, it seems as though Sierra Wireless' decline in June is nothing more than continued downward pressure based on the market's previous disappointment.

Now what: To their credit, Sierra Wireless' CEO Jason Cohenour elaborated that the current quarter should get the company "through the worst" of its supply constraints, and insisted they should be completely through it by the end of the year. What's more, management expects the enterprise solutions segment to enjoy sequential improvement for the duration of this year, and higher levels of sustained growth over the long term.

At the same time, much of that growth will come from Sierra Wireless' recent enterprise-centric acquisitions. Assuming it can successfully navigate the challenges of integrating these acquirees and their technology into its broader enterprise business, Sierra Wireless could be poised to address a key concern of its skeptics. In the end, for opportunistic investors who don't mind some volatility, that's why I think Sierra Wireless is still a promising long-term bet.