Please ensure Javascript is enabled for purposes of website accessibility
Log In Help Join The Motley Fool
Free Article Join Over 1 Million Premium Members And Get More In-Depth Stock Guidance and Research
By Rich Duprey - Jul 11, 2015 at 9:00AM

Fast food has fallen on hard times and customers are grumbling, but one chain seems to know how to do it right.

When it comes to ordering fast food, consumers are getting more picky. Photo: Dean Hochman, Flickr.

It's no surprise that customer satisfaction with McDonald's (MCD 1.12%) is deteriorating.

Same-store sales at the restaurant chain have been on an ugly downward trajectory both here in the U.S. and around the globe. Over the past two years, there have only been three months when McDonald's recorded comps that weren't negative, and then it was largely because it was literally giving away its coffee for free.

McDonald's is trying to lure customers back by becoming a "modern, progressive burger company," offering new and fresher ingredients (while making it difficult for customers to order the items they do want, like soda), but it's having little noticeable effect. Again, no surprise to any disinterested outside observer. 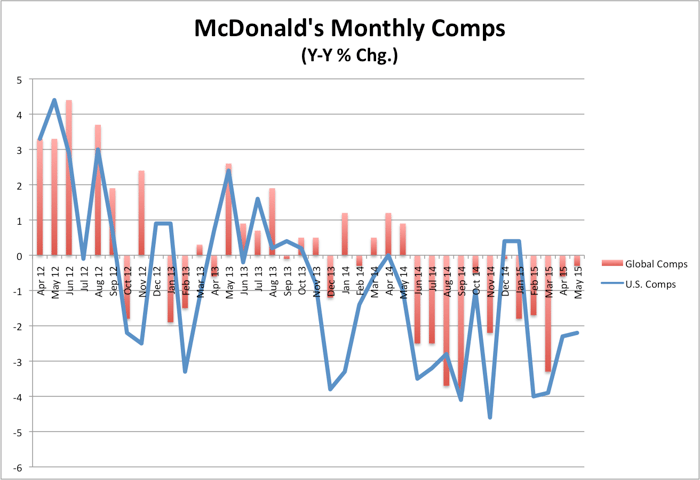 Serving up a tasty treat
So when the American Customer Satisfaction Index released its restaurant report for 2015, hardly anyone batted an eye that the burger joint was marked dead last on the list of 18 quick-serve chains. It was last last year too, but its customer satisfaction rating slid 6%this year, falling from from 71 to 67.

And there's probably little joy in knowing that Wendy's (WEN 0.52%) and Burger King also fell. Saying every burger joint is down is hardly consolation.

In fact, the rankings show that customers seemed to have had their fill of fast-food chains. ACSI says that overall ratings at limited-service chains dropped 3.8% to an average of 77 (so McDonald's is well below average) and that compared to full-service chains like Olive Garden or Applebee's, the gap between them widened to its largest spread in five years.

Across all of the benchmarks ACSI uses to rank the chains -- from accuracy of orders and quality of the food and drinks to the courtesy of the staff and the speed of checkout or delivery -- fast-food restaurants suffered a collapse in customer satisfaction.

Going for quality first
The analysts offered up a few explanations for the downfall. With an improving economy, lower unemployment rates, and higher wages, consumers can be more persnickety about their food when they dine out. In a recession, price trumps quality, but as conditions improve "quality becomes more salient," says ACSI.

They not only want fresher ingredients but also an overall better experience, which could explain why McDonald's isn't gaining any traction with its turnaround efforts.

So who was the consumers' top choice in the American Customer Satisfaction Index Restaurant Report 2015?

The trend is your friend
It wasn't fast-casual chains Chipotle Mexican Grill (CMG 2.00%) or Panera Bread (PNRA), which came in second and third, respectively. (Chipotle was also a first-time entrant on the list.)

Despite its reliance on serving just what customers are said to be looking for with its fresh, wholesome ingredients and a pleasing environment, it wasn't enough to be top dog this year.

And last year's winner, Papa John's Pizza (PZZA 3.12%), fell all the way down to fourth place, the first time since the survey began that it hasn't placed in the top three. (In fact, all the pizza chains including Pizza Hut and Domino's (NYSE: DPZ) suffered big drops.)

In fact, only one fast-food chain actually improved their rating year over year: Dunkin Donuts saw its rating improve 4% from 75 to 78.

Nothing to squawk about
This year's first place honors fell to another newcomer to the list: privately held chicken sandwich shop Chick-fil-A, which not only came out on top with consumers, but also earned a customer satisfaction score of 86, the highest ever recorded by a fast-food restaurant. We should probably have seen this coming. In 2013, the market researchers at Technomic said Chick-fil-A surpassed Yum Brands' (YUM 0.38%) KFC chain as the largest chicken joint by revenues, generating some $5 billion in sales that year even though it has less than half the number of restaurants than its rival and all of its stores close on Sundays out of respect for its owner's religious beliefs.

Chick-fil-A started as the Dwarf Grill in 1946 with the first named restaurant opening in the early 1960s. Today, the chain has over 1,900 locations in 42 states and Washington, D.C., and it notched $6 billion in sales last year, or about 20% year-over-year growth -- expansion its competitors can only dream of enjoying. It also remains a family-owned chain, with Dan Cathy serving as chairman, president, and CEO.

Do one thing and do it right
By focusing primarily on one item and going all out to provide a quality product and service, Chick-fil-A was able leapfrog over many bigger, better financed, and better-known chains.

This is probably key to its success, despite Chick-fil-A having stirred up controversy in the recent past. Consumers, though, are looking past such tempests in a teapot and have decided that when it comes to a good chicken sandwich, personal beliefs won't ruffle their feathers and they'll continue lining up to buy one.