Please ensure Javascript is enabled for purposes of website accessibility
Log In Help Join The Motley Fool
Free Article Join Over 1 Million Premium Members And Get More In-Depth Stock Guidance and Research
By Matthew DiLallo - Jul 12, 2015 at 9:15AM

Schlumberger Limited points out just how much harder it is for U.S. oil companies to keep up with Saudi Arabia.

A lot of reasons have been given as to why Saudi Arabia is allowing the oil price to not only fall but remain weak. Some suggest it's because it's seeking to harm emerging rivals like the U.S. and Russia. Others have suggested that the move is because it wants to keep its regional rival Iran at bay. While both could be true, the reason Saudi Arabia isn't worried about the oil price is because it doesn't need a high oil price to justify the drilling costs needed to maintain or grow its production. This is due to the fact Saudi Arabia only needed to drill 399 new wells last year just to keep its daily production at 11.4 million barrels of oil. That's a simply jaw-dropping number when we compare it to its two closest rivals, which are detailed on the following slide from a Schlumberger Limited (SLB -2.14%) investor presentation. 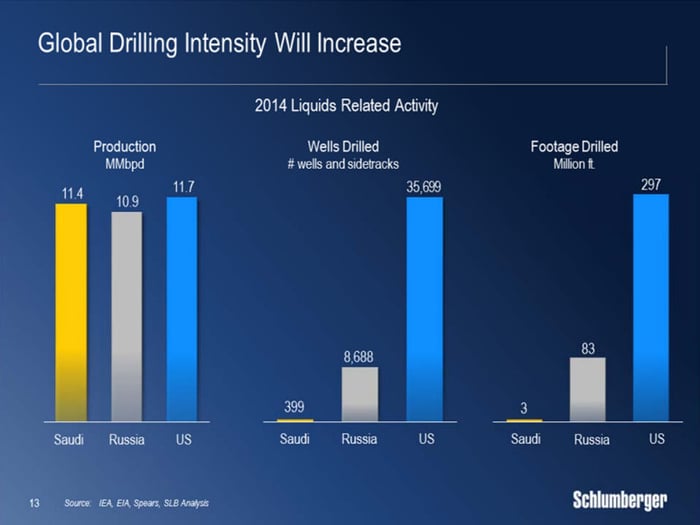 As that chart demonstrates, Saudi Arabia needed to drill nearly 99% fewer wells than the U.S. needed last year to maintain its global production lead. To put that into perspective, at an average well cost of roughly $8 million for a shale well in the U.S., it would have cost U.S. oil companies roughly $285 billion to drill those 35,699 wells. Meanwhile, at that same $8 million well cost it would have cost Saudi Arabia just $3 billion to drill the 399 wells it needed. That suggests at a $50 oil price nearly all of Saudi Arabia's production is generating free cash flow, which the country can use for things other than drilling new oil wells. Meanwhile, at that same price nearly half of the cash flow generated by U.S. oil production would need to be reinvested in new oil wells. It's why Saudi Arabia makes so much money on oil while others don't have a lot left over, especially now that oil prices are lower.

Drilling intensity will only grow
Saudi Arabia doesn't have to drill a lot of new wells to maintain its oil production because its production naturally declines by only 2% per year. That's a much lower rate than the rest of the world as the global production-weighted decline rate is closer to 7% and heading toward 9% by 2030 according to the International Energy Agency. Meanwhile, the decline rate for shale wells is even higher, with first year production declines of upward of 90% being reported.

Thanks to its low decline rate, Saudi Arabia is in an enviable position as it doesn't need to drill very many wells each year to maintain its production. That's not the case for the rest of the world. In fact, increasing global drilling intensity, or drilling more wells each year, was the message of Schlumberger CEO Paal Kibsgaard in discussing the above slide on the company's first-quarter conference call in response to an analyst's question. He said:

What they're saying with that slide is that, over time, basins mature. And in order to firstly maintain production, and subsequently increase production, which I think, in many of the land basins, we will be looking to do that in the coming years, you will have to increase drilling intensity. That's the basic message. So I think you're seeing that increase in drilling intensity happening in many basins around the world today. The drilling intensity is obviously generally far below what we are seeing today in North America land. But that's basically because, in many -- in most of the other basins, we are still working within the conventional resource base. And as you move from the conventional toward more unconventional, you will also generally see an increase in drilling intensity from that.

What Kibsgaard is suggesting is that as the world moves from conventional oil production, which is when an oil company drills a well to tap a massive underground reservoir of oil, to unconventional oil production, where the oil is tightly trapped in rocks, it will lead to increased drilling intensity. By increasing drilling intensity it will force countries and companies to divert more of their oil cash flow into new wells, which is what we've been seeing in the U.S. in recent years as it has shifted to unconventional wells. It's a shift that Saudi Arabia won't need to make for quite some time as it maintains the largest proven conventional oil reserves in the world.

Investor takeaway
Saudi Arabia is making a mint on oil production because it doesn't need to drill a lot of new wells to keep its production steady. That's not the case for the rest of the world, as oil companies will need to drill more wells each year just to keep up. It's a trend that Schlumberger expects will keep it very busy in the years ahead as the leading oil-field service company will be assisting oil producers in drilling many of these wells.