As we head into the third quarter, here are some good options in the banking sector

The market has pulled back over the last few weeks, and we think there are some bargains to be had in the financial sector. While there are plenty of bank stocks that are risky and "recession-prone," there are some great companies in this sector as well. With that in mind, we asked three of our analysts to tell us about their top picks in the banking industry right now. Here is what they had to say. 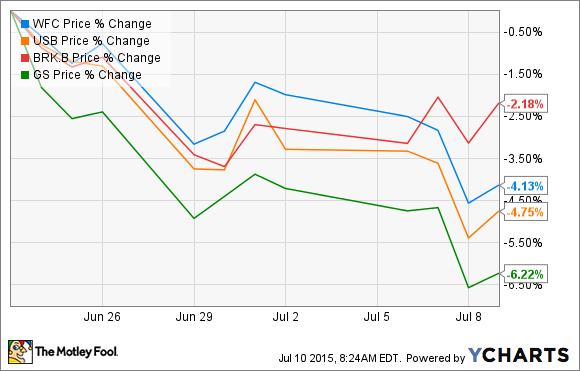 Matt Frankel: My favorite bank stock as we head into earnings season is Goldman Sachs (GS 0.57%), which has lost about 6% of its value over the past few weeks.

Goldman produced fantastic numbers during the first quarter, with strong year-over-year gains in trading (23%), investment banking (7%), and investing and lending (9%) -- all while reducing non-compensation expenses.

While past performance doesn't guarantee future results, there are several reasons to believe the second quarter will be just as good, or even better than the first. During the most recent conference call, Goldman's management said the investment banking backlog increased during the first quarter, and there are no signs of a slowdown in the IPO or M&A markets. In fact, The Wall Street Journal recently reported that IPO activity is expected to surge in the second half of the year, and Goldman said that it anticipated strong M&A activity from the energy sector.

On a more long-term note, Goldman recently announced its intention to get into the consumer lending business, which I view as a brilliant move. Goldman has access to lots of low-cost capital, and this could be a great way to take advantage of the rising interest rates that are expected over the next couple of years.

Since Goldman trades at a historically low valuation of just 1.16 times its book value, now could be a great time to invest in the "smartest guys on Wall Street."

I understand, of course, that these are two of the priciest bank stocks on the market today. US Bancorp trades for a 93% premium to its book value while Wells Fargo trades for a 71% premium. By contrast, their average big bank brethren trade for a premium of only 13%. As with anything else, however, you get what you pay for with bank stocks.

While most banks struggle to generate a 10% return on equity in order to cover their cost of capital, these two lenders have returned 15% and 14%, respectively, on their shareholders' equity over the past 12 months. They've done so not only by balancing the competing objectives of revenue growth and responsible lending, but also by operating more efficiently than virtually any of their peers.

These are the traits that define the best bank stocks. Don't settle for anything less.

By investing in Berkshire, you get two things:

Berkshire's stock portfolio is a "who's who" list of the great names in banking. It holds multi-billion dollar positions in Wells Fargo ($25.5 billion), US Bancorp ($3.6 billion), Goldman Sachs ($2.2 billion), and more than $800 million in Bank of New York Mellon.

And that doesn't include the option for Bank of America shares that Berkshire holds. Berkshire can buy 700 million shares of the nation's second-largest bank any time before September 2021 for $5 billion. Those shares are worth more than $11 billion today.

If we also factor Berkshire's stake in financial companies like American Express and MasterCard into the mix, that's more than $55 billion -- 16% of Berkshire's market cap -- directly tied to banks and financials.

With Buffett (and investment managers Ted Weschler and Todd Combs) allocating future capital, there's plenty of reason to use Berkshire as a proxy for investing in the banking industry, while potentially getting better returns than if you tried to just pick one or two on your own.

Lastly, Berkshire stock looks reasonably valued. Its share price and price-to-book-value ratio, a measure that Buffett himself says is a good way to value the stock, are both down almost 10% in 2015.