Most Wall Street analysts have a pretty negative view on the oil industry at the moment and for good reason. The price of oil is down about 50% from the peak with no signs on the horizon that it will make a quick return trip back to the top. But in the midst of all this negativity one company seems to have caught analysts' eyes and drawn fairly broad praise: ConocoPhillips (NYSE:COP). In fact, it was recently given an $82 per share price target by an analyst from Argus, implying 40% upside for the oil giant. Here's why analysts are in love with ConocoPhillips these days and think its stock price is undervalued.

In recently raising its price target on ConocoPhillips from $75 per share to $82 per share the Argus analyst wrote:

We believe that Conoco's combination of major long-cycle and unconventional short-cycle projects will enable it to generate shareholder value in a range of commodity price environments ... it is increasingly levered to high-margin liquids production; and it has most of its proven reserves in low-risk, OECD countries. We also believe that Conoco's high-quality, low-cost asset base will help it to outperform peers when commodity prices are low.

What that analyst is referring to is best visualized, which is what the company has done via the following slide from a recent investor presentation. 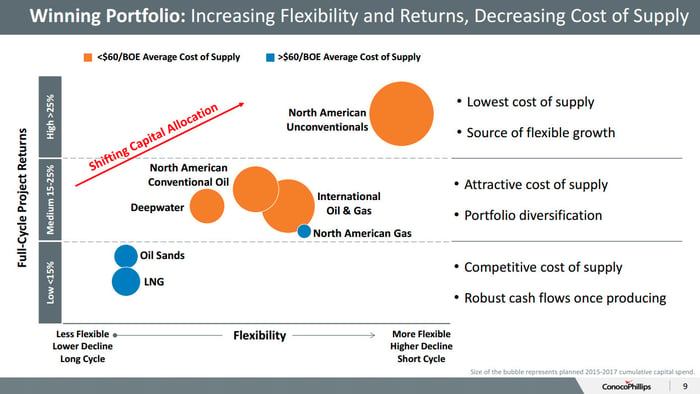 As that slide points out, ConocoPhillips has projects across the spectrum. But it is starting to shift its focus from long-cycle projects to shorter-cycle projects. One reason for the shift is the fact that the company has invested a lot of money in recent years in lower decline long-cycle projects, such as oil sands and LNG, and most of these projects are now in service or will be coming online over the next year or so. While these projects offer lower returns, they produce a lot of cash over the long term, which the company can now reinvest in shorter cycle, higher return projects like North American unconventionals. It's a great balance that few of its rivals possess.

Built for low oil prices
Looking ahead, ConocoPhillips has a robust supply of low cost oil-and-gas resources that can be developed. As this next slide notes, the company's total resource base is filled with potential short- and long-cycle projects. 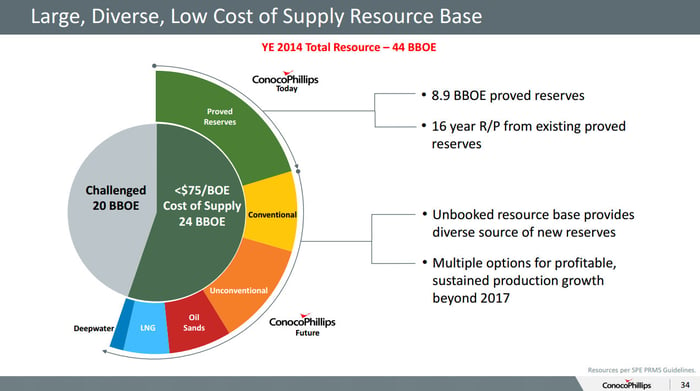 ConocoPhillips proved reserves form the base to maintain its current production rate for years to come as this production can be further developed at current oil prices. In addition to these reserves the company has a gigantic resource base that it can tap in the years ahead. Of those future resources 7.3 billion barrels of oil equivalent, or BOE, can be profitably developed for a cost of supply ranging from $45-$60 per BOE, while another 8 billion BOE can be developed at a cost of supply in the $60 to $75 range. This suggests that ConocoPhillips will be fine without the return of a triple digit oil price. Further, if triple digit prices return, it has about 20 billion BOE in currently challenged resources that would then make sense at that higher price.

These resources really encapsulate what analysts love about ConocoPhillips, which is the fact that the company is built for low oil prices. It's why the Argus analyst isn't the only one bullish on the company as an analyst from Citigroup recently put ConocoPhillips at the top of its list of oil majors that are built for a future of $65-$75 oil as it has such a high exposure to low-cost shale growth.

Even more to love
But it's not just the low cost of supply that is catching the eye of analysts. ConocoPhillips also has an investment-grade-rated balance sheet, a plan to be cash flow neutral by 2017 as its major projects roll off, and a very compelling dividend yield. It's this overall combination that's driving their bullishness.

Further, the company has also focused really hard on cutting its current costs, which are expected to show up on the bottom line this year. In fact, an analyst from Barclays recently predicted that ConocoPhillips would be one of 10 U.S. oil majors to beat full-quarter earnings estimates. That analyst raised the company's full-year earnings forecast from $0.20 per share to $0.25 per share, which is 25% higher. Given the fact that stocks are valued by their earnings, this bump in profitability would then imply a higher stock price for the company.

Investor takeaway
ConocoPhillips is one of the few oil companies that have analysts excited these days as the company has the best combination of low cost supply and flexibility of projects. Further, it has everything else an investor would want in an oil company as it's cutting costs to improve profitability, has a strong balance sheet, and a very compelling dividend. It's easy to see why analysts are so bullish and see upward of 40% upside from here even if the price of oil doesn't reclaim its former peak anytime soon.

Could ConocoPhillips' Stock Really Be Worth $82 Per Share? @themotleyfool #stocks $COP Next Article
Current