From a review of its financial filings, you wouldn't describe Costco (NASDAQ:COST) as a global retailer. Sure, it runs warehouses in several international markets (eight, to be exact). But it generates 70% of revenue directly from its primary market, the U.S.

Yet management sees that home-base reliance inching lower, toward more of a 50/50 split between domestic and international markets. "We expect that our international operations could account for a larger portion of our sales in future years," they explain in Costco's most recent 10-K annual filing.

That shift will happen through relatively more warehouse openings overseas. The trend toward foreign soil is clear over the long term: Since 2010, Costco has expanded its U.S. presence by 14% while increasing its overseas footprint by nearly 60%.

There are two good reasons for this focus on international growth: profitability and market opportunity.

Higher profits
Stuffed as it is with high-income shoppers, the U.S. market is a perfect fit for Costco's business model. That's why roughly one quarter of all Americans carry this retailer's membership card. Costco plans to continue adding locations here while also boosting subscriber income by converting standard members to executive status, and by improving its subscriber renewal rate beyond its current 91%.

Some of that gap has to do with Costco's low-profit gasoline business, which tends to drive its U.S. profit margin down. But international countries are also cheaper in major expense categories like wages and benefits. That's why they are a big part of the story behind Costco's rising profitability since 2010. 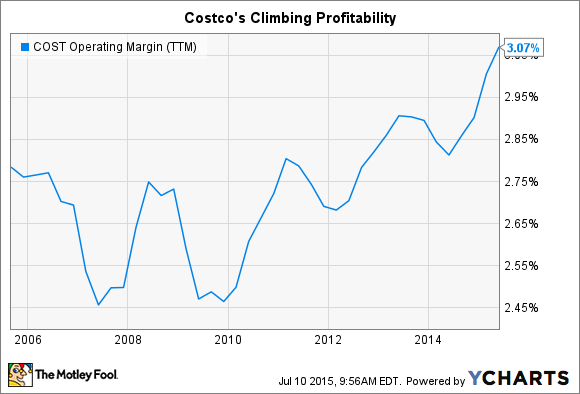 Management doesn't see the profitability gap changing any time soon. In response to a Wall Street analyst question on the "sustainability of these high [international] margins" in a recent conference call, Chief Financial Officer Richard Galanti said "some of the most profitable countries will come down a bit, but are still going to be higher than the U.S."

Greater opportunity
International markets also offer stronger potential for square footage growth, as they aren't yet blanketed with warehouse clubs. Club penetration in Canada, for example, is about 2.5 warehouses per 1 million residents. Mexico's warehouse club penetration stands at an even less dense 1.8.

By comparison, the United States has by far the greatest penetration at over 4 warehouses per 1 million residents, thanks to the 1,100 warehouses split between Costco and Wal-Mart's Sam's Club.

That adds up to significantly greater market potential overseas, relative to the United States. You can see how Costco benefits from these less competitive climates by checking sales growth. Comparable-store sales growth in international markets matched (or soundly beat) the U.S. figures for the last five years.

The takeaway for investors here is that while Costco has attractive opportunities in the U.S., it will likely focus investments outside of its home market in the future. International expansion carries extra risks, but the payoff to shareholders should include higher sales growth and greater profitability.