Being a platform operator and service provider sometimes comes with unique challenges. That's become readily apparent for Apple's (NASDAQ:AAPL) fledgling streaming music-service, Apple Music. In many ways, Apple Music is simply playing catch up with other competing music streaming services already available on iOS, but now that Apple has jumped in to compete directly, its role as the platform operator is complicating the situation -- so much so that the antitrust regulators at the FTC are now scrutinizing the Mac maker, according to a recent Reuters report.

Is 30% too much to ask?
Regulators are currently examining Apple Music, although no formal investigation has been launched. At issue is whether rivals can compete viably, given the 30% of all purchases (including in-app subscriptions) that Apple keeps under the agency model.

Once upon a time, the 30% cut seemed quite reasonable with everything that Apple was offering developers. The company provides a slew of development kits and other tools to enable developers to succeed, while giving them access to a platform with hundreds of millions of users. But as the platform evolved and competition intensified, both within and from outside the platform, it starts to look a little bit steep, especially as there are plenty of ways to skirt Apple's cut, although Apple has policies in place to discourage cutting it out of the action.

Companies are prohibited from directing users to buy products and services outside the iTunes App Store. Users are certainly able to do this on their own, but companies just can't explicitly market to them in this way within the app itself, nor can they link users away for this purpose. The App Store has long had these rules for all apps and in-app purchases. But there's nothing from stopping companies from emailing customers directly, since that message is sent from outside the app.

Which is exactly what Spotify did
The ongoing tension was perfectly exemplified last week, when Spotify appealed directly to its iOS-based subscribers. While Spotify offers its premium subscription service, which offers no ads and other benefits, for $9.99 on its website, the same service costs $12.99 when subscribed through the App Store. The $3 difference, of course, is designed primarily to help offset Apple's cut, but the end result is now that Spotify Premium is less competitive to iOS users since it costs $3 more than Apple Music per month. 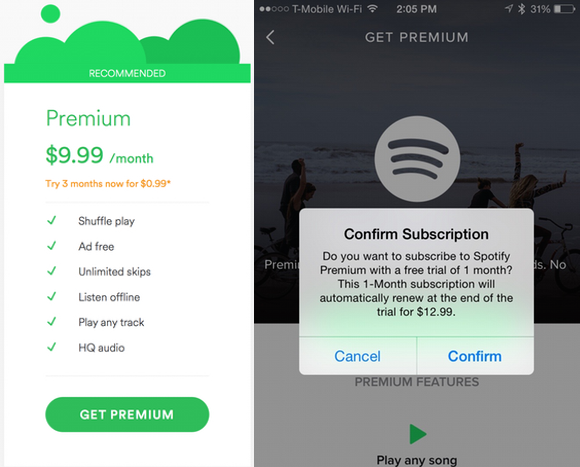 Signing up for Spotify Premium on the Web (left) versus through its iOS app (right). Source: Spotify and App Store.

That's why last week Spotify sent an email out to all of its iOS subscribers, advising them that they could be saving $3 per month. All they have to do is cancel their Spotify subscription in iTunes and then re-sign up through Spotify's website for the same service.

What's a rival music streaming service to do?
There are no easy solutions for rival services. They can price at parity with Apple to be competitive with consumers, eating the 30% hit in revenue. They can offset Apple's cut by increasing the price through iOS, making them less competitive to consumers. Or they can choose not to offer in-app subscriptions, losing an element of convenience, which weakens an important channel for potential customer acquisition.

There have been reports that Apple may alter the long-standing 70/30 split structure. Many of the industries that are struggling to adapt to changing technologies and consumer preferences already face challenging economics (such as music streaming or publishing, to name a couple), and 30% off the top makes it that much harder to remain viable. If Apple truly wants to enable content partners and developers for the sake of a vibrant platform, it will need to change its tune, even if it benefits rival services. Some regulatory pressure wouldn't hurt, either.