Please ensure Javascript is enabled for purposes of website accessibility
Log In Help Join The Motley Fool
Free Article Join Over 1 Million Premium Members And Get More In-Depth Stock Guidance and Research
By Matthew DiLallo - Jul 14, 2015 at 8:05AM

As its issues continue to mount, SandRidge Energy Inc.’s stock continues to sink.

SandRidge Energy Inc. (NYSE: SD) was supposed to be an undervalued turnaround story with the potential to double its stock price in short order. That was when the stock was at $5 per share and oil was persistently in the triple digits. Now, however, with oil hovering around $50 a barrel, the stock is under a buck per share. It's a stock price that suggests that there isn't much hope left for SandRidge Energy investors that this company will ever turn around as its issues continue to mount.

So. Much. Debt!
While the persistently weak oil price is at the center of SandRidge Energy's troubles, it is far from its only issue. A more pressing issue is the gargantuan amount of debt it borrowed to fund its growth over the past few years. It's debt that is becoming a nearly insurmountable weight as the company doesn't stand a chance of drilling its way out of it as it had planned to do in years past.

After its most recent $1.25 billion debt issuance, SandRidge now has $4.6 billion in debt outstanding. That's an incredible amount of debt and, for perspective, there are oil companies 10 times its size with similar levels of outstanding debt. Worse yet is the fact that the PV-10 value of SandRidge's reserves, or the present value of its proved reserves discounted by 10%, is a mere $3.04 billion at recent projected forward oil and gas prices. It's an imbalance that suggests that SandRidge Energy could be insolvent if current prices persist.

Investors left quaking
To make matters worse, SandRidge's ability to repay that debt is in serious jeopardy. For example, last quarter 64% of SandRidge Energy's revenue didn't come from its oil and gas sales, but from oil and gas hedge gains. It's a safety net that Bloomberg recently reminded investors is going away as SandRidge's hedges begin to roll off as we head into 2016. In fact, as Bloomberg pointed out, SandRidge hedged 90% of its production in 2015, but only has about a third of 2016 production hedged. That suggests its cash flow will drop significantly in 2016, leaving it with less cash to drill new wells along with less cash to maintain its debt.

Another emerging concern is the rash of earthquakes to hit the state of Oklahoma, where SandRidge Energy operates. The state's energy regulator recently called the spike in quakes a "game changer" and is now considering tougher restrictions on drilling activity. The driving force behind these quakes is believed to be high-volume wastewater injection wells, which are critical to the operations of companies like SandRidge Energy as these wells significantly reduce the costs of trucking wastewater away from wells. Its system is detailed on the following slide. 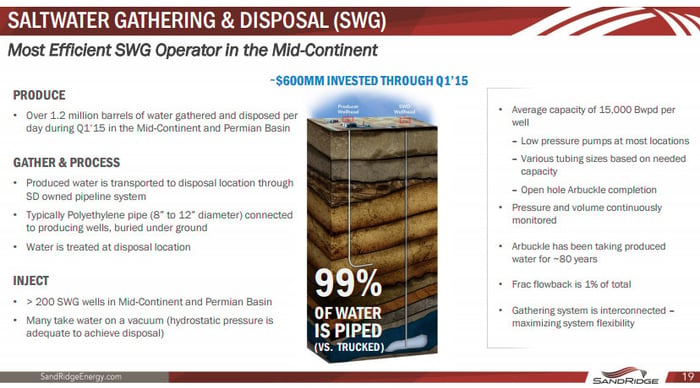 Not only is this system critical to SandRidge Energy's operations, but it had planned to put its entire saltwater disposal system into an MLP and use that business to raise capital via an IPO. That would enable it to recoup some of the more than $600 million it invested into the system. Its capital that the company needs given its hefty debt load, but money it might never see if regulators put restrictions on these wells.

The only hope
SandRidge Energy's main focus right now is to get its well costs below $2.4 million, which would enable it to earn a 50% internal rate of return on new wells at current commodity prices. That return just happens to be the same one the company was earnings when oil was in the $80-per-barrel range when its well costs were north of $3 million per well. If it's successful, the company will be able to cut its capital spending from its current rate of $700 million down to an annual average of $400 million to maintain flat production.

All that being said, even if that plan works, it really just has the company stuck in neutral. It doesn't grow its cash flow so that it can support its debt load. Furthermore, it's questionable whether the company will even be able to generate $400 million in cash flow to support that type of capital program given its debt load. Instead, its only hope of surviving is for oil prices to rally meaningfully higher and it's anyone's guess when, or even if, that will happen.

Suffice it to say, I'm not holding out much hope that SandRidge Energy will ever rebound. That said, I do plan to hold my shares till the end of the year just to see if it is able to make some progress and lessen my loss a little bit. With the stock down 88% over the past year, it's not like I have that much more left to lose.

Matt DiLallo owns shares of SandRidge Energy. The Motley Fool has no position in any of the stocks mentioned. Try any of our Foolish newsletter services free for 30 days. We Fools may not all hold the same opinions, but we all believe that considering a diverse range of insights makes us better investors. The Motley Fool has a disclosure policy.