In the past few years, airlines have gone on a plane-buying binge, expanding the backlogs at industry top dogs Boeing (NYSE:BA) and Airbus to record levels. This has driven strong stock performance for Boeing, which has delivered a total return of more than 150% over the past five years.

Yet the benefits have not trickled down to Embraer (NYSE:ERJ), a vastly smaller Brazilian aerospace company that is nevertheless the third-largest aircraft manufacturer in the world. Embraer focuses on selling smaller aircraft in the 70-to-130-seat range, and demand in this segment has been affected by a global trend toward using larger airplanes that offer lower per-seat costs. 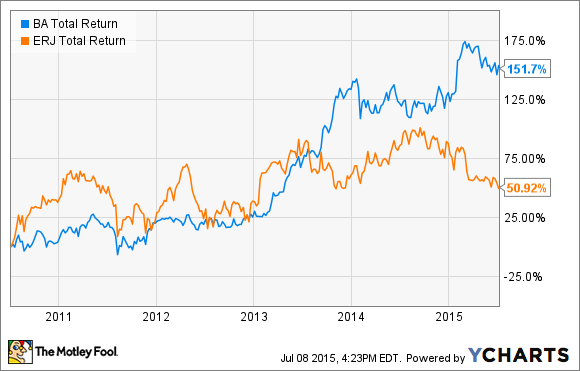 Indeed, as the chart above shows, Embraer has delivered a total shareholder return of only 51% in the past five years -- and all of those gains came in late 2010 and early 2011. Since then, Embraer stock has dramatically underperformed the market. However, it's now primed to bounce back.

Boeing's backlog swells, while Embraer's sinks
The trajectories of the Boeing and Embraer order backlogs provide a clear explanation for the divergence in stock performance. Boeing ended Q1 2010 with a backlog valued at $315 billion: nearly five times annual revenue. By the end of Q1 2015, Boeing had grown its revenue by more than 45%, yet the backlog had increased to more than five times annual revenue, at $495 billion.

Meanwhile, Embraer had a backlog of only $16 billion at the end of Q1 2010: about three years' worth of sales. By late 2012, this had fallen to $12.4 billion -- only two years' worth of sales -- raising the possibility that Embraer would have to drastically cut production.

Embraer has had to fight hard for each E-Jet order. Image source: Embraer

Since then, Embraer's backlog has bounced back to $20.4 billion, as of Q1 2015. Even that hasn't quieted the bears, as many of the orders are for new "E2"-generation models that Embraer won't deliver until near the end of the decade, while Embraer has had to significantly discount its current-generation models.

Change is in the air
However, Embraer may be turning into a golden opportunity for investors. First, its valuation has come down significantly as its stock has plunged from around $40 less than a year ago to less than $30 today.

Second, Embraer made good progress on beefing up its backlog last quarter by firming up some previously negotiated deals and winning some new orders.

The 45 orders for current-generation E-Jets -- representing nearly half a year of production -- will bolster Embraer's near-term performance. These orders have filled a significant portion of the open delivery slots before the transition to the E2-series aircraft, which will be introduced between 2018 and 2020.

Additionally, there was a favorable mix between the smaller E175 (18 orders) and the larger E190 and E195 models (27 orders). By contrast, Embraer didn't deliver any of the larger models in Q1 -- contributing to weaker-than-expected profitability -- and the E190 and E195 combined represented less than 30% of Embraer's backlog for current-generation aircraft as of the end of Q1.

Margin improvement coming
The strong sales of current-generation E-Jets last quarter should allow Embraer to make a smooth transition to its E2-generation jets over the next few years. It was particularly good to see Embraer bag more than two dozen orders for the E190 and E195, as those aircraft cost more and tend to carry higher margins than the E175.

Embraer needs to bridge the gap until it introduces the second-generation E-Jets. Image source: Embraer

Embraer is also getting a big margin tailwind from the strong dollar, as it sells the vast majority of its products in dollars but has 25% of its expenses tied to the Brazilian real. The real has currently depreciated about 13% from the level embedded in Embraer's 2015 profit forecast. If it remains near that level, Embraer could see a margin benefit of about 1.5 percentage points this year.

Finally, investors can look forward to solid growth opportunities ahead as customers seem very interested in the upcoming E2-series jets. The E2 jets will have lower maintenance costs and much better fuel efficiency, which should allow Embraer to achieve better pricing and higher margins.

Embraer ended Q1 with 210 firm orders for the E2 jets. In addition to getting the two firm orders from Tianjin Airlines, Embraer also secured 30 firm orders from Brazilian carrier Azul and 25 from U.S. aircraft leasing company Aircastle. This brings the total E2 backlog to 267 planes: a solid haul, considering that Embraer still has nearly three years to sell the plane before its first scheduled delivery.

Among aircraft manufacturers, Boeing is a safer bet than Embraer due to its massive order backlog, which is allowing it to seamlessly increase production. But Embraer stock could be the better performer in the coming years as its profit margin recovers and demand for the E2 jets drives growth.