In a sign of the times, Fifth Street Finance (NASDAQ: FSC) took a step toward reducing expenses that investors pay when investing in the high-yield business development company. It announced a fee waiver whereby it would charge only 1% per year on new assets, down from its current base management fee of 2%.

It wasn't necessarily a shocker. Executives spent the better half of the last conference call fielding questions about fees, which have become truly exorbitant relative to performance.

Who really owns the earnings?
In the first two fiscal quarters of 2015, Fifth Street's external manager received $43.3 million in fees. Shareholders, by contrast, enjoyed only $64.6 million in net investment income. When gains or losses are included, shareholders saw their collective wealth fall by $5.2 million.

It's hard to justify $43.3 million in fees for losing $5.2 million -- after fees, of course -- but such is the problem with generous compensation. Most egregiously, $16 million of the fees paid were so-called incentive fees -- fees that are, at least in their name, meant to reward good performance. 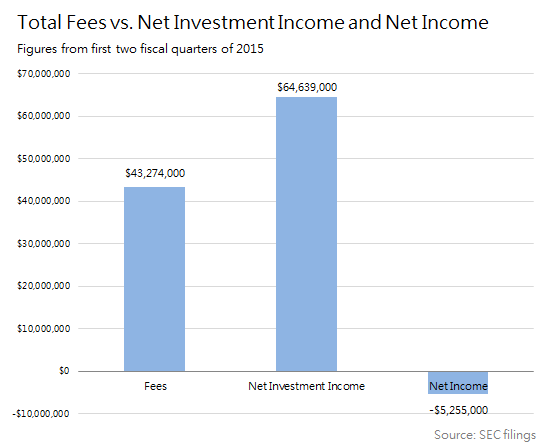 Slashing the base management fee from 2% of assets to 1% of assets on new money really doesn't get to the crux of the issue. The existing shareholder base stands to gain nothing from the fee waiver until Fifth Street Finance raises more money. And it will only be able to do that when its shares trade higher than book value, last reported at $9.18 per common share. That's about 40% higher than shares currently trade.

Furthermore, the fee waiver is anything but permanent. In the 8-K filed with the SEC, it points out that the fee waiver will extend until January 1, 2017, at which point it "is the intention of [Fifth Street Asset Management (NASDAQ: FSAM)] to renew the waiver on an annual basis going forward." An intention isn't the same as a contractual commitment.

What could right the ship
Fifth Street Finance tends to trade in a tight band such that it yields about 10%-11%. To get back to NAV -- a share price at which the fee waiver would actually matter -- Fifth Street needs to earn about $0.92 per share in net investment income. It's currently on pace to earn about $0.76 per share, based on its annualized first-quarter earnings.

To get there, Fifth Street Finance needs to slash its fee on all assets, not just its new assets.

Doing that, however, seems almost impossible. Thanks to its 2014 IPO, we now have a clear lens into its external manager, Fifth Street Asset Management. The external manager generated roughly 86.5% of its fee income from Fifth Street Finance in the quarter ended March 31, by my calculations. The BDC is the asset manager's golden goose.

The external manager would have to give up roughly $6.2 million in quarterly fees for Fifth Street Finance to earn $0.92 per share in net investment income based on its first-quarter numbers, and thus put up the kind of earnings that might put it back at book value. A fee waiver of this magnitude would wipe out half of Fifth Street Asset Management's pre-tax income in the first quarter.

I don't think investors in the external manager have the wherewithal to tolerate a 50% cut to pre-tax income in the name of growth. Fifth Street Asset Management's performance has been anything but stellar in recent months. After a failed IPO at the midpoint price of $25 per share, the company finally went public at $17, and shares now trade for less than $10.

I can't see how a true fee cut happens. Fifth Street Finance shares will probably continue to languish below NAV. And Fifth Street Asset Management, unless it has a change of heart, will slowly bleed out its golden goose. The House of Tannenbaum is looking more like a house of cards.