If you thought Google (NASDAQ:GOOG)(NASDAQ:GOOGL) stock was done climbing this week, think again. After rising 6% during the past two days on reports that the search giant might be wisely curbing costs, shares of Google popped another 11% in after-hours trading Thursday after it soundly beat Wall Street's earnings expectations for the first time this year.

Quarterly revenue rose 11% year over year, to $17.73 billion, or roughly in line with expectations of $17.75 billion. As I suspected might be the case in my earnings preview, currency headwinds continued to play the role of antagonist; revenue would have climbed 18% year over year on a constant currency basis.

But the market is arguably most excited about Google's bottom line, as that revenue translated to adjusted earnings of $6.99 per diluted share. Analysts, on average, were only expecting adjusted earnings of $6.75 per share. Google also generated operating cash flow of $6.99 billion and, after capital expenditures of roughly $2.52 billion, achieved free cash flow of $4.47 billion.

Our strong Q2 results reflect continued growth across the breadth of our products, most notably core search, where mobile stood out, as well as YouTube and programmatic advertising. We are focused every day on developing big new opportunities across a wide range of businesses. We will do so with great care regarding resource allocation. [emphasis mine]

Speaking of core search, revenue from Google's core advertising business rose 11% year over year, to just more than $16 billion, representing approximately 90.4% of overall revenue. That's up from 89.9% last quarter, and a slight increase from almost exactly 90% in the same year-ago period.

For perspective on the recent downward trend in costs-per-click, here's the latest chart from Google dating back to the beginning of 2013: 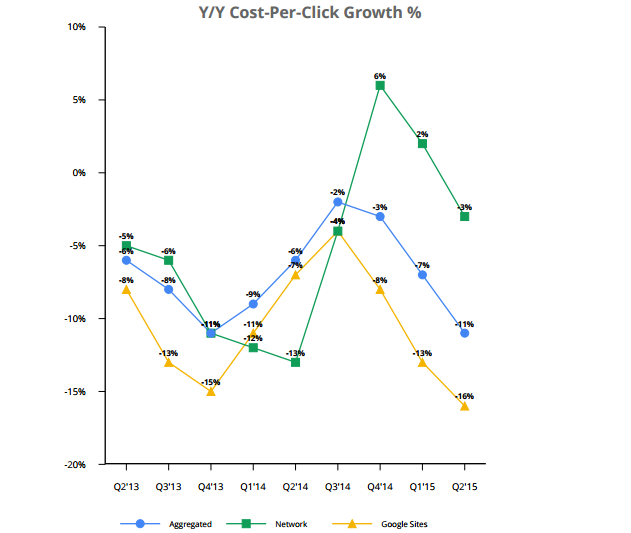 But these trends shouldn't be particularly concerning to investors. Porat was careful to note in her comments that "mobile stood out" in core search. To understand why, recall that, during last quarter's earnings conference call, then-CFO Patrich Pichette took the unusual step of explaining that many analysts were "incorrectly assuming that the growth trends in our Sites clicks and CPCs are primarily due to difficulties monetizing search on Mobile."

Instead, Pichette insisted, the downward trend in clicks and costs-per-click -- the latter of which measures how much Google makes from each ad -- were due to significant increases in YouTube viewership. During this quarter's call, Porat stated YouTube viewership was up a whopping 60% year over year in Q2, good for the fastest overall growth rate YouTube has seen in two years.

Why does this matter? YouTube's TrueView video ads reach customers earlier in the purchase funnel, so they tend to monetize at lower rates than typical Google.com ad impressions. Either way, as long as Google's core ads outside of TrueView also remain strong, lower monetization from a fast-growing incremental source of advertising revenue is an enviable problem to have.

Finally, revenue from Google's "Other" segment rose 17% year over year, to $1.7 billion. According to Porat during the call, the geographic mix of the Google Play business meant foreign exchange also had an impact on "Other" revenue. Without providing much detail, she stated that, "Year-over-year and sequential movements were driven by substantial growth in Play, offset by a decline in [Nexus] hardware sales." Even so, the Nexus business' undersized influence on Google's overall results mean its weakness shouldn't be a deal-breaker for long-term Google investors.

In the end, Google has just presented shareholders with their first quarterly earnings beat in 2015, driven by a strong core business and signs of being a more careful steward with its now nearly $70 billion cash hoard. With that in mind, it's no surprise the market is driving shares up so aggressively right now.