Please ensure Javascript is enabled for purposes of website accessibility
Log In Help Join The Motley Fool
Free Article Join Over 1 Million Premium Members And Get More In-Depth Stock Guidance and Research
By Bob Ciura - Jul 16, 2015 at 10:30AM

Nike fourth quarter and fiscal 2015 earnings results show it is not slowing down anytime soon.

Nike(NKE 0.38%) released fiscal 2015 fourth quarter and full-year results late last month, and the numbers were outstanding. The athletic apparel giant grew both revenue and profits across its geographic segments. Even better, Nike has plenty of catalysts for future growth, including its womenswear and e-commerce businesses. This means fiscal 2016 is likely to be another strong year for Nike investors. 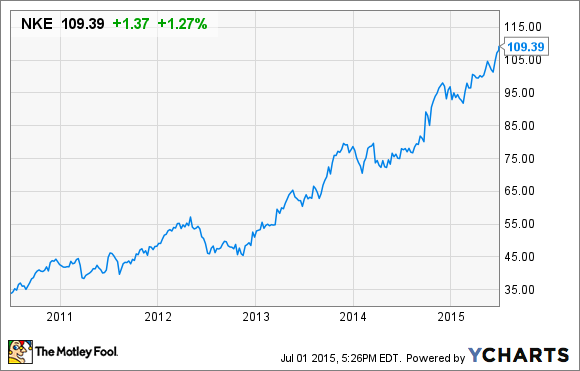 As you can see, Nike has richly rewarded shareholders for years, and 2015 was no exception. Here is how the company managed such a hugely successful year, and why there are plenty more ahead.

Another year of growth
In the fourth quarter, Nike revenue rose 13% year-over-year to $7.78 billion, excluding the effects of foreign currency translations. That beat consensus estimates for $7.69 billion in revenue. For the entire fiscal year, revenue grew 10% to $30 billion.

On the bottom line, earnings per share jumped 26% year-over-year in the fourth quarter and 25% for the full year to $3.70 per share. Impressively, Nike is having great success all across the globe. Revenue excluding currency effects soared 20% in China, 19% in Japan, and 17% in Western Europe for the quarter. Separately, worldwide futures orders, a crucial gauge of future demand, grew 13% last quarter excluding foreign currency effects.

Aside from continued growth in its core business, there are two reasons to believe Nike can put up double-digit revenue and earnings growth in the new fiscal year: the booming women's business and its emerging presence in e-commerce.

Promising catalysts for the future
The women's business grew revenue by 20% last year to nearly $6 billion. The major product developments that propelled this segment include the Nike Pro Bra Collection and a broad assortment of tights. Moving forward, Nike is counting on its recently launched market initiative, Better For It, a call for women to push themselves athletically, and created a global community in which athletes can interact with each other and with Nike. In just two months, Better For It totaled more than 18 million online views.

As far as e-commerce is concerned, the company posted 51% year-over-year revenue growth in the fourth quarter and 55% growth for the full year, fueled by increases in both traffic and conversion. The e-commerce business surpassed $1 billion in revenue this past year.

Going forward, Nike sees plenty of additional potential for the e-commerce business. Management noted that traffic on mobile devices recently surpassed traffic on desktop computers. This is an important moment, as Nike forecasts global consumer spending through e-commerce to exceed $1 trillion each year. And an increasingly significant portion of this is done on mobile devices.

Nike: Great stock for growth and income
Nike rewards its shareholders through both growth and huge cash returns. The company funnels cash back to shareholders with dividends and share buybacks. Nike presently pays a 1.1% dividend, and this year raised its payout by 16%. Moreover, Nike returned $678 million to shareholders via stock buybacks in the fourth quarter. The company has an $8 billion share buyback authorization, which is expected to last through 2016.

The company has spent $6 billion on share repurchases since 2012, at an average cost of just $73 per share. Considering the stock now trades at $109, it is clear the buybacks were accretive to investors.

Nike wrapped up another great year and has even better days on the horizon. The stock has performed extremely well as the company grows, and the future will be fueled by continued growth of the core brand, the women's business, and Nike's e-commerce business.

Bob Ciura has no position in any stocks mentioned. The Motley Fool recommends Nike. The Motley Fool owns shares of Nike. Try any of our Foolish newsletter services free for 30 days. We Fools may not all hold the same opinions, but we all believe that considering a diverse range of insights makes us better investors. The Motley Fool has a disclosure policy.