Now that the investing year is nearly halfway over, it's a good time to take an accounting of who's up and down. In the heavily watched area of technology stocks, while many are looking to giants Apple, Microsoft, and Google for gains, the large gains generally come from small companies that have longer runways for growth. The problem is, these companies rarely appear on investors' radars. So that's why I conduct a stock screen to identify these companies before the average investor does.

Because I'm risk averse, and not a total masochist, I typically exclude penny stocks and companies with market capitalizations of under $300 million. All things equal, I feel agency, disclosure, and liquidity risks aren't properly priced with such investments, making it hard for individual investors to find the rare gem with sustainable, market-trouncing gains from the plethora of bad actors. So I typically steer clear of stocks with low capitalization and extremely low trading volumes.

With that said, here are the best-performing technology companies over the past 26 weeks (and, of course, fit the parameters I described) as measured by the Motley Fool Stock Screener. 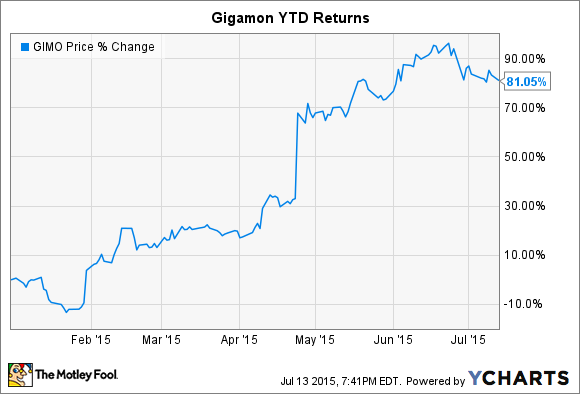 Shares of fabric services and traffic intelligence networking company, Gigamon, has led the charge this year, with shares up over 80% year to date. Much of that gain -- nearly 30% -- was on one day alone, as investors reacted favorably to news that the company reported a 47% year-over-year revenue increase and nearly doubled its earnings per share. And this is not just a 2015 run. Shares are up 163% over the past year. But even with the tremendous run, it's still only valued at $1 billion.

It appears the company is well positioned from a customer standpoint, as it boasts over 1,700 end customers and 65 of the Fortune 100 as clients. The company's network visibility solutions, fancy speak for solutions to monitor network connections in real time, are in demand in a time where these connections are becoming increasingly complex. 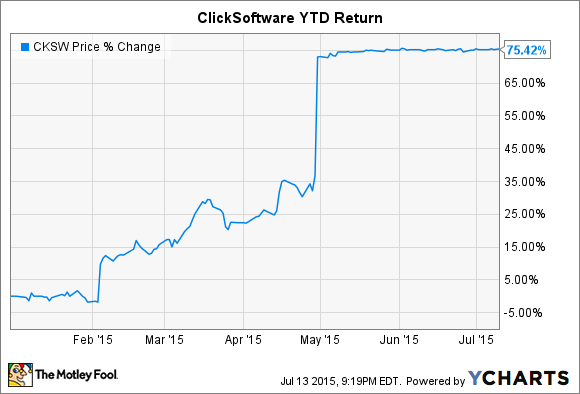 Sometimes the best-performing stocks give you information that you can't directly profit from but do give insight into how the industry is moving. And that's what happened here with ChickSoftware, an Israeli automated mobile workforce management company, as the company was recently taken private by Francisco Partners, a technology-focused private-equity company.

The company's software helps organizations more effectively manage workforces, something that will become even more necessary as large-headcount working environments of yesteryear are being replaced by more-efficient and productivity-focused models with use of subcontractors and independent contractors for specific tasks. Apparently, Francisco Partners thinks it found a great deal with the Israeli company, and it paid a nice premium for the technology. 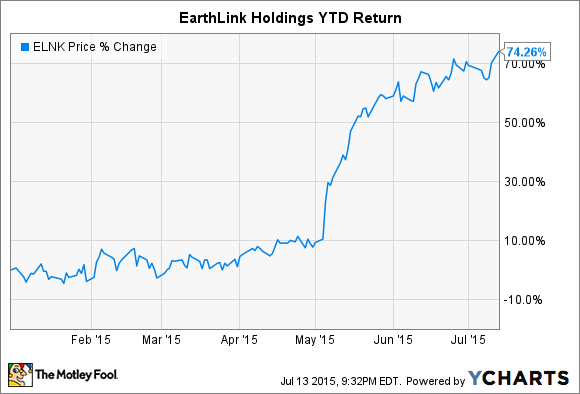 Rounding out the top three technology-focused companies is EarthLink Holdings. The managed network and cloud-services company saw its shares rise 14% in just one day this year, as the company beat analyst estimates on revenue and EPS and raised guidance for the full year with its first-quarter earnings. Following its early May report, the company announced a partial redemption of high-interest debt from both improved cash flow that added to its cash pile and lower-interest debt.

And although the stock certainly looks cheap, colleague Alex Dumortier warns about the company's lack of growth, labeling the company a "special situation." The company reports earnings on Aug. 4, and I'm eagerly waiting for information confirming Alex's thesis or to see if the company is in the midst of a turnaround. With its shares up 74% year to date and 106% over the past year, other investors seem to think the company will continue to perform.

A word of caution
Stock screens can be an important part of the stock-discovery process, but they shouldn't be the entirety of your due diligence. Before you decide to invest, spend time learning about the company, its products and services, and its place within the greater industry. Note these are only companies that are on my watch list -- well, the ones that will continue to trade are -- as I plan to spend more time learning about both before I even think about a potential investment. In the end, I'm willing to lose out on potential gains as I learn the company's true value proposition rather than rashly invest in a company by following the crowd.