What: After pre-announcing better than expected sales and profits, shares in Allscripts Healthcare Solutions (NASDAQ:MDRX) are soaring 10% higher.

So what: Allscripts Healthcare's IT software solutions are used by healthcare providers to manage patient care. In the second quarter, demand for those software solutions was greater than anticipated within acute care and international markets.

As a result, Allscripts Healthcare expects that when it officially reports its second quarter results it will deliver sales of between $350 million and $353 million, which is above analyst estimates for $347.1 million, and EPS of $0.12, which is higher than estimates for $0.10.

However, investors ought to remember that healthcare IT is a very competitive market and that Allscripts Healthcare isn't the market share leader (privately held Epic Systems holds that distinction). Further, while the top line results were better than Street forecasts, sales were only marginally higher than the $351 million reported last year -- and that's hardly growth worth writing home about.

Investors should also recognize that Allscripts Healthcare remains a turnaround story that has been struggling to deliver top and bottom line growth. Over the past five years, both quarterly sales and profits have slumped as competitors have gained ground at its expense. 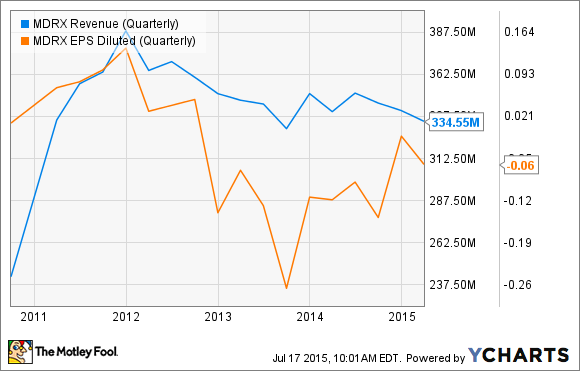 Additionally, investors may also want to resist chasing shares higher given that Allscripts Healthcare's balance sheet isn't all that spectacular. The company had $88 million in cash and $572 million in debt coming out of the first quarter and a current ratio -- the ability to make good on short term financial obligations if creditors come knocking -- of just 1.04. For all those reasons, I'm hesitant to embrace this stock on its run up.