Please ensure Javascript is enabled for purposes of website accessibility
Log In Help Join The Motley Fool
Free Article Join Over 1 Million Premium Members And Get More In-Depth Stock Guidance and Research
By Jeremy Bowman - Jul 19, 2015 at 11:10AM

ESPN, the heart of Disney's empire, is facing declining profits and the trend should only get worse as cord-cutting accelerates.

Walt Disney Co. (DIS -1.38%) is arguably the world's most powerful and best-known media and entertainment company. Not only does it own the famous theme parks and movie studios, but it also counts several subsidiaries under its auspices including ABC, ESPN, Pixar, Marvel, and Touchstone Pictures.

That combination of properties has delivered blockbuster gains for investors in recent years as the stock has appreciated more than 500% since the Great Recession. Investors have benefited from both earnings appreciation and multiple expansion as the stock has risen at nearly double the pace of earnings over the last five years, following a general trend in the market. 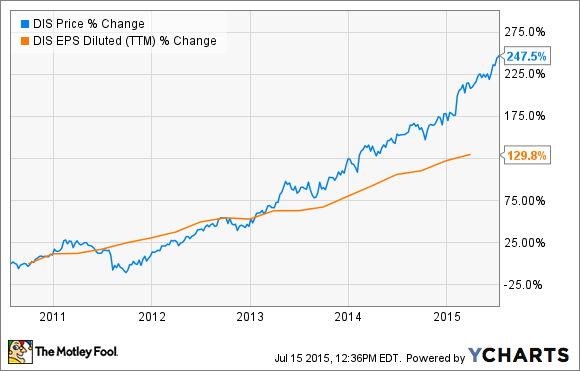 Still, for earnings per share to more than double in five years is no small feat for a company of Disney's size. Despite its bulletproof brand and rocket-like growth in recent years, Disney is facing a new kind of risk that could undermine the company's profit machine and put negative pressure on earnings.

About half of Disney's $13 billion in operating income comes from its cable networks, and the segment is by far the company's most profitable on a margin basis, delivering a whopping 43% operating margin last year.

The crown jewel in Disney's cable empire is ESPN. ESPN is by far the most popular network on cable, and it has spawned a family of channels that have become synonymous with sports entertainment. While Disney does not break out ESPN's results, the network brings in more than four times the affiliate fees of any other network, charging an average of $6.55 per subscriber per month to carry its programming.

Disney's next best network was the Disney Channel, which charges $1.21 in affiliate fees. ESPN2 is third at $0.74. That means a vast majority of Disney's cable profit comes from ESPN, and the sports brand may therefore be responsible for nearly half of the parent company's earnings.

Trouble in paradise
Part of the reason why ESPN has become so valuable to both Disney and cable providers is because live programming such as sports is one of the few areas of television protected from streaming services like Netflix. It is also less susceptible to DVR viewing, which viewers can use to skip ads, so ESPN can command a higher ad rate.

However, pay TV subscriptions have peaked as cord-cutting is becoming more popular, and that's creating a challenge for ESPN. Disney's cable profit peaked over a year ago in March 2014 at $6.6 billion on a trailing-12-month basis, falling to $6.3 billion a year later.

That decline can be attributed to ESPN losing 3.2 million subscribers over the past year as people have dropped or trimmed cable packages, as well as to the ballooning prices for the rights to broadcast live sports as competitors like Fox Sports and Comcast have entered the market.

This means ESPN's costs are growing while its subscriber base is declining, a troubling proposition for its future.

What the future holds
ESPN's carriage fees are expected to continue their exceptional growth, hitting as much as $8.37 monthly per subscriber by 2018, according to media research firm SNL Kagan. But advertisers care about viewers. And if audiences are declining, ESPN's profit is likely to continue to slip. Meanwhile, any aspirations to strike out on its own like HBO Now are limited by agreements that would allow cable providers to remove ESPN from their most popular packages and only offer it a la carte.

The network has benefited from a fortuitous moment in media consumption as viewers move from cable and satellite service to streaming options, but that bonanza is coming to an end.

For Disney investors, that also means that the stock's fairytale journey may soon meet its fate.

Jeremy Bowman owns shares of Netflix. The Motley Fool both recommends and owns shares of Netflix and Walt Disney. Try any of our Foolish newsletter services free for 30 days. We Fools may not all hold the same opinions, but we all believe that considering a diverse range of insights makes us better investors. The Motley Fool has a disclosure policy.