Please ensure Javascript is enabled for purposes of website accessibility
Free Article Join Over 1 Million Premium Members And Get More In-Depth Stock Guidance and Research
By Tyler Crowe - Jul 19, 2015 at 11:03AM

Investors shouldn't expect the moon when Core reports earnings, but these three points should be watched carefully.

For more than a year, Core Laboratories' ( CLB -7.55% ) shares have been on a precipitous decline, as drilling activity in the offshore region has started to decline and oil prices have taken their toll on the entire industry. Since April of last year, shares have declined more than 45%. 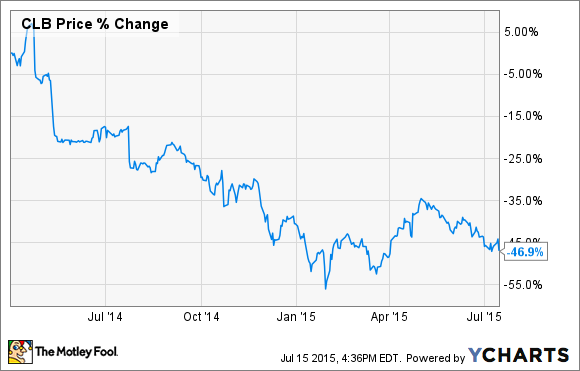 We can all expect a decline in share price, since the company's prospects don't look as robust as they did more than a year ago, but is the sell-off a little too much? One way to check is to see what the company has to say when it releases its quarterly earnings on July 22. Here are three questions you should look to have answered when the company reports.

How much has the offshore slowdown affected revenue?
Originally, many thought that U.S. shale drillers would be the ones most affected by the decline in oil prices, but today it's looking more and more as if offshore drilling has drawn the short straw. Many of the larger companies in the space have delayed exploration and appraisal work in deepwater regions because they aren't considered economical at today's oil prices.

This is important to Core Labs because one of the company's specialties is data collection and analysis of high-pressure, high-temperature reservoirs, or HPHTs, that are almost exclusively found in deepwater regions. In fact, the company even acquired Sanchez Technologies, a manufacturer of evaluation and monitoring equipment for HPHT reservoirs, during this recent quarter to bolster its position in this particular type of reservoir analysis.

This work won't simply vanish in one quarter, but continued weakness in offshore exploration and drilling activity could have an outsized impact on the company's revenue than a decline from other types of oil and gas work.

Can it cut costs fast enough to preserve strong margins?
A major strong point of Core Labs as an oil and gas services company is that it's carved out a niche within the market that doesn't garner much competition. This has given the company pretty strong pricing power over its services rather than some of the other commoditized services in the space, such as contract drilling and pressure pumping. However, with oil prices where they are, all service providers are seeing their pricing power deteriorate and need to cut costs.

As part of last quarter's earnings release, management said it was looking to cut costs not just where demand for Core's services is weak now, but also where it anticipates demand will be weak in the future. Some of the expenses associated with these cost-cutting measures were realized last quarter, which resulted in a decline in operating income margins to 19.9% from 34.5% the year prior.

No investor should expect Core's operating margins to return to that greater-than-30% range in today's oil and gas market, and in honesty, 20% margins are nothing to scoff at. If it can cut costs enough to make up for declining revenue and maintain strong operating income margins, then perhaps the selloff of Core's shares over the past year was a little overzealous.

How's that free cash flow situation?
From an investor's standpoint, free cash flow is probably the most important aspect to watch for Core Labs. For years, the company has done a spectacular job of converting revenue to free cash flow. Even last quarter with its declining revenue and margins, it was able to generate $72.7 million in free cash flow. Since the company's need for capital is extremely low, it's able to return much of that excess cash to shareholders through share buybacks.

For Core to remain a lucrative investment in today's market, generating some excess cash and returning it to shareholders is incredibly important. So far, the company has repurchased more than $115 million of its own stock. If it can keep up its strong cash-flow generation, it should be able to buy back an even greater share of the company's stock, since shares are 34% less than what they were a year ago.

What a Fool believes
Core Labs posseses two traits that suggest the company will be able to handle the downturn in oil prices just fine. It has a strong competitive niche, and it has a squeaky clean balance sheet. So the fears that Core will fold under the pressure of today's market seem unlikely to come true. For the company to remain a decent investment during this down market, though, it will need to be able to maintain some reasonable operating margins and continue to churn out free cash. If it can prove that these things are on track in the coming quarter, then investors should view the recent share-price decline as a great opportunity to by shares of Core at a discount.