Learn three reasons why these three frac sand suppliers might be in for further crashing share prices -- and what long-term investors should do about it.

Oil investors need no reminder of the pain crude's crashing price has caused such stocks such as frac sand producers Emerge Energy Services (NYSE: EMES) and Hi-Crush Energy Partners (NYSE: HCLP). However, potential and current investors need to be aware of three risks -- all of them tied to the current oil crash -- that could send share prices crashing even further, and keep them suppressed longer than previously anticipated.

Oil prices may remain lower longer than initially expected
Many analysts had been predicting that crude prices might start to recover by the second half of 2015. Those predictions were partially due to earlier reports from the International Energy Agency, which showed worldwide crude production growth rapidly declining in the first quarter of the year. 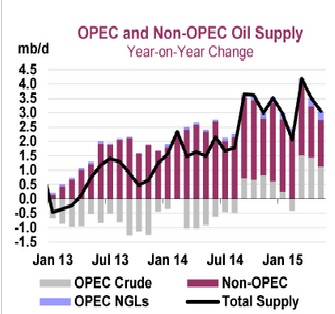 However, now record production from several key OPEC countries -- especially Iraq, Saudi Arabia, and the UAE -- has caused recent supply growth to far outpace demand increases. Furthermore, the IEA expects crude demand growth to further slow during the second half of 2015 because of weaker projected economic growth in developed countries.

In addition, the recent Iranian nuclear deal means that while Persian crude production will probably take several months to ramp up, 2016 is likely to see a continued oil glut. That in turn could put the kabosh on a short-term recovery in crude prices.If this proves to be the case oil producers are likely to continue pressuring suppliers to lower prices on inputs such as frac sand, resulting in contracted profit margins.

Industry margins under increasing pressure
Most frac sand production is under long-term contracts; however, the terms aren't necessarily written in stone. For example, according to Bryan Shinn, CEO of U.S. Silica Holdings, the company is working with its customers to reduce short-term pricing in exchange for higher volume commitments and extending contract terms. This willingness to work with long-term business partners to reduce sand pricing was also evident at Hi-Crush and Emerge Energy..

Frac sand demand and prices are down 30%-40%, and 20%-25%, respectively, from their peaks in 2014.. An industry turnaround hinges on a recovery in oil prices, but it's very possible prolonged cheap oil will continue to put pressure on frac sand margins. That in turn is likely to see unit prices of sand suppliers, especially high-yielding MLPs such as Emerge and Hi-Crushto continue to face substantial downward pressure.

Growing risk of distribution cuts
On April 24, Emerge Energy -- in order to ensure compliance with its debt covenants -- slashed its distribution 29% and lowered full-year payout guidance by 47% -- which resulted in its unit price beginning a downward spiral from which it has yet to recover. 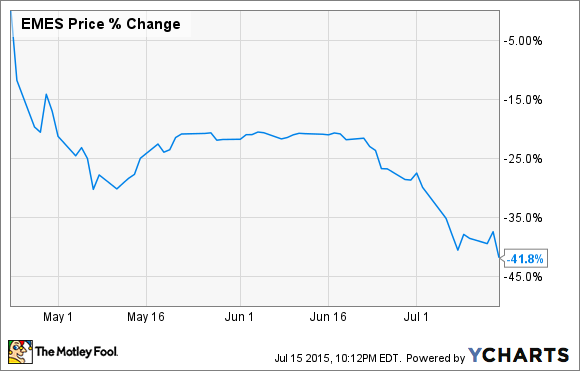 Given that Emerge is a variable rate MLP that distributes all of its distributable cash flow, or DCF, each quarter, investors need to be prepared for high distribution volatility. Indeed during its last conference call, management warned, "our expectation is that we could have another sequentially down distribution."Thus, Emerge's unit price may have further to drop, especially since many investors don't realize its variable pay nature.

In the Case of Hi-Crush's distribution, there are two protective factors that make its payout relatively safer in the short term, though far from guaranteed.

First of all, unlike Emerge, Hi-Crush has a managed distribution policy, so it can save up excess DCF from quarter to quarter to smooth out payouts during times of industry distress. For example, over the past 12 months, Hi-Crush has managed a 1.54 times distribution coverage ratio, which means management has some breathing room in the short term and doesn't necessarily have to cut the payout if industry conditions don't quickly improve.

Compared to other MLPs such as midstream pipeline operators -- who typically have Debt/EBITDA ratios of around 5.9 -- frack sand MLPs have pretty low debt levels. Still Hi-Crush's exceptionally low leverage ratio means it is less likely to need to cut its distribution in the short term to maintain its own debt covenants.

However, should the oil crash continue into 2016, Hi-Crush investors should be prepared for management to potentially cut the payout as well.

Takeaway: Industry recovery may take longer than expected, so be patient, and take advantage of weak prices
While I remain bullish on the long-term prospects of frac sand suppliers such as Emerge Energy and Hi-Crush Partners, it's becoming clear that lower oil prices may stick around longer than many people initially thought. Thus current and prospective investors should be patient and use any future share price weakness as a buying opportunity.

When oil prices do eventually recover, such patience is likely to be rewarded with strong capital gains and distribution growth, which should maximize the chances of good long-term total returns.

Adam Galas owns units of Emerge Energy Services and leads The Grand Adventure dividend project, which recommends Emerge Energy Services and U.S. Silica. The Motley Fool recommends U.S. Silica Holdings. Try any of our Foolish newsletter services free for 30 days. We Fools may not all hold the same opinions, but we all believe that considering a diverse range of insights makes us better investors. The Motley Fool has a disclosure policy.