Apple has been repurchasing its own shares hand over fist in recent years, but it's not done yet. Not by a long shot.

With Apple (AAPL -0.29%) set to report earnings next week, most investors will be looking for the headline items like iPhone units or net income. Not me. I like to keep a close eye on the Mac maker's capital return program. Specifically, the share repurchase portion of the program has been instrumental in driving Apple's EPS growth in recent years.

For example, net income rose 33% last quarter, but diluted EPS soared 40% since Apple has bought back $30 billion in shares over the past year. This is why I'm particularly interested to see how much the company repurchased last quarter.

There's more where that came from
Last quarter, Apple conducted $7 billion in open-market repurchases, which brought its cumulative total thus far to $80 billion. That was getting a little too close for comfort relative to the $90 billion total authorization -- so Apple boosted its share repurchase authorization to an incredible $140 billion. While the move is primarily an ongoing vote of confidence that Apple's business is as strong as ever, it could also potentially imply that Apple could be interested in repurchasing over $10 billion in shares this quarter.

Apple may not necessarily feel pressure to repurchase a large amount this quarter since the $140 billion authorization is good through March 2017, but that's never stopped it before. Besides, Apple has increased its capital return program every year without fail.

From time to time, Apple has utilized accelerated-share repurchase programs when it wants to buy back a particularly large sum of shares. To date, it has done four of these ASR programs, but three of them were notably large. 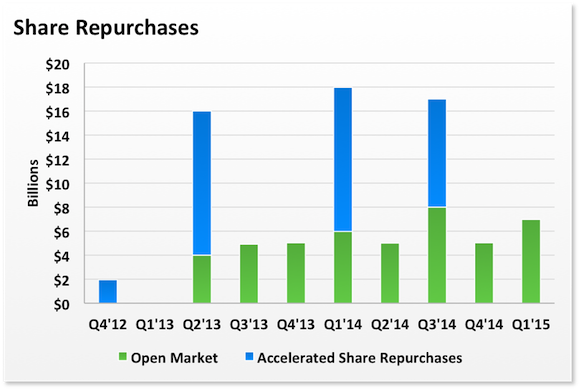 The last ASR was initiated in Q3 2014, and Apple has been using ASRs every two to three quarters. This is just more evidence to suggest that another ASR could be in the works. While Apple has usually timed these ASRs to coincide with market dips, the company seems to have no fears even when shares flirt with all-time highs.

More debt isn't always a bad thing
Apple is also seemingly making an annual habit out of tapping the debt markets to fund these capital returns. Following the last earnings release, Apple has conducted not one, but two bond offerings. In May, Apple issued another $8 billion in bonds. Like its prior offerings, this one consisted of both floating-rate and fixed-rate notes of varying maturities. And then in June, Apple issued its first-ever yen-denominated bonds in order to take advantage of extremely low rates abroad (these notes carry a fixed rate of 0.35% and are due in 2020). That offering added another $2 billion to its iCoffers.

At the end of March, Apple had "just" $22.2 billion in domestic cash, which is close to the low end of its comfort zone ($18.1 billion is as low as its domestic reserves have gotten in recent memory), so raising capital through debt offerings makes sense. Apple also sold some Swiss franc-denominated bonds in February. It's worth pointing out that ASRs have often followed major bond offerings shortly thereafter.

Investors won't have to wait long to find out how much Apple repurchased last quarter, but I'm sure it'll be a lot.