Please ensure Javascript is enabled for purposes of website accessibility
Log In Help Join The Motley Fool
Free Article Join Over 1 Million Premium Members And Get More In-Depth Stock Guidance and Research
By Daniel B. Kline - Jul 21, 2015 at 10:22AM

One trade organization predicts a leap in sales, while another is more cautious.

While retailers have struggled a bit this year, with sales actually falling in June, a new study suggests they have reason to be hopeful about the back-to-school shopping season.

More parents in the United States plan to increase their back-to-school spending this year than at any time in at least the past four years, according to research from the International Council of Shopping Centers. About 67% of back-to-school shoppers plan to spend more than they did last year, compared to 50% of shoppers in 2014 and 39% in 2013, Chain Store Age reported.

That is good news for retailers as the back-to-school shopping season is second only to holiday shopping for many stores.

"Back-to-school is viewed as an essential purchase," Jesse Tron, a spokesman for ICSC told Bloomberg.

It is really the interpretation of "essential" by parents which determines how big the season is for retailers. Growing children may need new clothes, and the start of the school year requires pencils, notebooks, and other supplies. Whether a child needs a new laptop, tablet, or other big-ticket item remains discretionary.

Where will people be buying?
While you have to consider the biases of a survey conducted by the International Council of Shopping Centers on this particular question, the survey showed that 83% of back-to-school purchases will involve physical stores, including 7% that will be made online and picked up in-store. In addition, 79% of the people who said they plan to order online for in-store pickup said they are likely to buy additional items once they are in the store.

But just because shoppers will be in a brick-and-mortar location does not mean they will not use technology. Nearly 80% of survey respondents plan to use a mobile device to enhance their in-store experience.

The ICSC survey also showed that discount stores remain the most popular back-to-school shopping choice, with 77% of respondents saying that is where they will go. Still, 40% plan for their back-to-school buying to include office supply stores, while online-only retailers will nab 29%, department stores will claim 38%, and apparel stores will appeal to 25% of shoppers.

An opposing view
Though the ICSC paints a rosy picture, another trade association for retailers does not have similar expectations for the season. The National Retail Federation told CNBC in mid-July that "total spending for school-age and college-bound students is expected to hit $68 billion this year, a drop of 9% compared to last year's forecast." The decline, according to the NRF, comes because of "an anticipated 11% decrease in college spending, which makes up about two-thirds of back-to-school revenue."

Despite the dire warning, a statement NRF CEO Matthew Shay made to the financial news organization suggests that results could turn out better than the early prediction.

"We are optimistic that economic growth and consumer spending will improve after a shaky first half of the year, and the back-to-school season is a great starting point," Shay said.

It all hinges on electronics 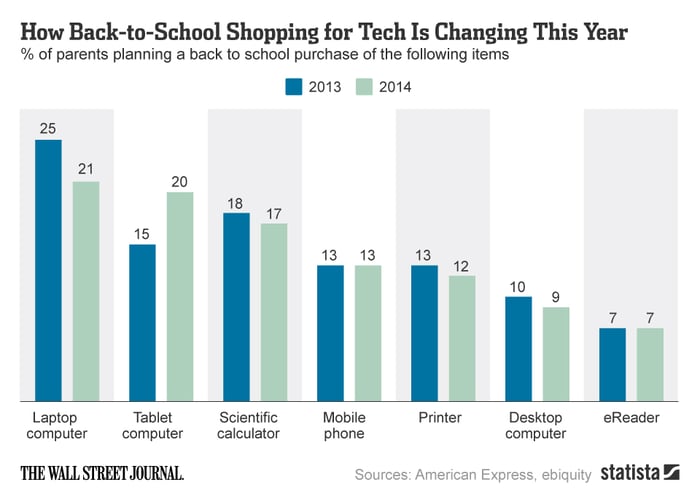 As you can see from this chart from 2014, electronics' purchases can vary greatly during the back-to-school shopping season. Source: Statista

The difference in the survey results between the two groups comes largely down to the NRF respondents predicting a 7% drop in electronics spending from the K-12 group and a 15% decline from college students. As you can see on the chart above, which compares purchases from 2013 and 2014, electronics spending can vary based on trends and needs.

In 2015, the cost of a quality tablet has declined precipitously thanks to Microsoft offering sub-$100 Windows-based models complete with Office 365 subscriptions and devices running Google Android. Whether people buy those for their kids (or splurge on higher-end tablets and even laptops) will tell us which prediction for the season will prove true.

Americans appear set to open their wallets for the back-to-school season but how wide they open them hinges largely on these bigger-ticket items.

Daniel Kline owns shares of Microsoft. He and his wife have already completed their son's back-to-school shopping, and no electronics were involved. The Motley Fool recommends Google (A shares) and Google (C shares). The Motley Fool owns shares of Google (A shares) and Google (C shares). Try any of our Foolish newsletter services free for 30 days. We Fools may not all hold the same opinions, but we all believe that considering a diverse range of insights makes us better investors. The Motley Fool has a disclosure policy.