Biogen's (NASDAQ:BIIB) investors are in store for a double dose of news this week. On Wednesday, the biotech is scheduled to present data for its Alzheimer's disease drug, aducanumab, and then on Friday we'll get second-quarter earnings from Biogen.

Which will have a greater effect on the biotech's stock price? Only time will tell.

We've already seen pretty good looking data from aducanumab in Alzheimer's patients, and Biogen has quickly moved into a phase 3 program. But investors are anxious because there hasn't been all that much data.

In the phase 1b study, only 65 patients received the two doses -- 3 mg and 10 mg -- that showed a statistically significant improvement in cognitive performance compared with patients taking placebo. "Improvement" in this case means a slowing of decline, since all three groups declined. The 10 mg dose also showed a statistically significant slowing of clinical decline on the CDR-SB scale, a measurement of a patient's cognitive and functional performance.

Biogen jumped into a pair of phase 3 trials testing two different doses without stopping at phase 2. The speed is understandable, given the multibillion-dollar opportunity in Alzheimer's, but the limited data rightfully makes investors a little nervous.

Tomorrow, Biogen has an opportunity to help alleviate some of that anxiety when it presents data from the 6 mg dose. Best case scenario, the dose slows the decline in cognitive and functional performance by patients by somewhere between how the 3 mg and 10 mg doses performed. Dose-dependent efficacy can happen by chance, but it's less likely to happen the more doses you have.

If the 6 mg dose works as well as the 10 mg dose, investors shouldn't freak out. For many drugs, the efficacy maxes out, so that may be as good as it gets.

If the 6 mg dose performs closer to or worse than the 3 mg dose, it doesn't necessarily mean that aducanumab isn't active and the phase 3 trials will fail, but it'll sure give investors a lot less confidence in the drug.

Biogen's share price has pulled back quite a bit since its run up after the phase 1b data was released in March, but it looks like there's still more room to fall if the data is perceived as negative. 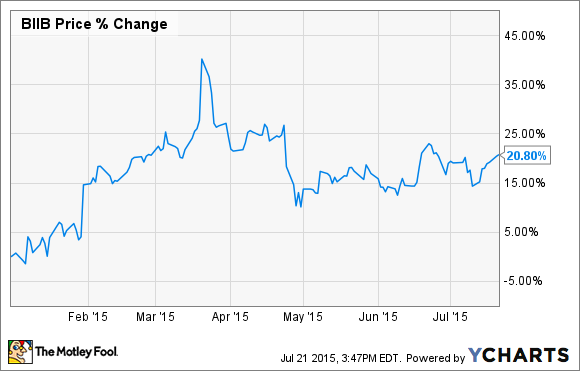 More than Alzheimer's
Biogen has become an Alzheimer's story this year because of the large potential opportunity if aducanumab works, but while we wait for the phase 3 data, earnings will still be important.

Investors should continue to focus on Biogen's oral multiple sclerosis drug, Tecfidera, since it's become the company's top-selling drug. The first quarter had some one-time issues, which shouldn't be a problem when Biogen releases earnings on Friday. Look for quarter-over-quarter sales growth of Tecfidera to resume.

There's also likely to be a lot of discussion about how doctors are feeling about Tecfidera's potential to facilitate patients getting progressive multifocal leukoencephalopathy, or PML, which is a potentially deadly brain infection. After the end of the second quarter, Biogen reported another case of PML, which could affect future quarters. Unlike the previous PML case, this case wasn't fatal, so it'll be interesting to hear what management says about how doctors are managing the risk.

Investors should also keep an eye on Biogen's new hemophilia drugs, Alprolix and Eloctate. Given the size of Biogen's multiple sclerosis franchises, the drugs aren't going to move the revenue needle all that much, but long-term, Biogen has to diversify and hemophilia seems like a ripe opportunity.