Quick-turn manufacturer Proto Labs (NYSE:PRLB) is set to report its second-quarter earnings on Thursday before the market opens. Going into the report, the Wall Street community expects Proto Labs to grow revenues by 18.5% year over year to a record $62.6 million and earn $0.48 per share.

Beyond the headline figures, investors should also familiarize themselves with the underlying drivers of Proto Labs' business to help determine whether the long-term investment thesis remains intact. In total, there are three key areas for investors to watch when Proto Labs reports earnings.

Historically, Proto Labs has done an excellent job of growing the number of product developers it serves on a quarterly basis. Most recently, Proto Labs served over 11,000 unique product developers in the first quarter, representing an increase of over 40% year over year. To be clear, though, a large portion of this increase was attributable to Proto Labs' acquisition of its Fineline 3D service, which wasn't part of the business the year prior.

2. European revenue
Despite Europe being a pain point for other manufacturers and 3D printing companies, Proto Labs CEO Vicki Holt highlighted during its first-quarter earnings call that it expects growth out of the region this year. This expectation is based on the company's plan to introduce new manufacturing services, including 3D printing, as well as new manufacturing materials into the European market in the latter half of this year.

In other words, investors should revisit this expectation to see if it remains on track and how the company's European segment fared in general.

3. Margins
In recent quarters, Proto Labs' gross profit margin has been falling on an annual basis. Management has cited a combination of currency headwinds brought on by the strong U.S. dollar and the inclusion of its Fineline 3D printing service, which carries a lower gross margin than its other segments, as reasons for the decline. 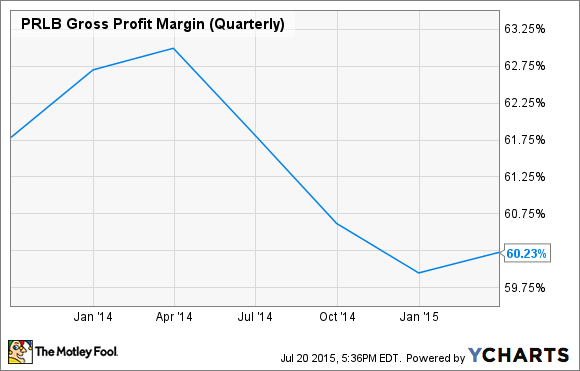 Although Proto Labs' gross profit margin remains healthy where it stood at the close of the first quarter, it may become a point of concern if it continues its downward trajectory. This is especially true if the decline was based on factors like pricing pressures or expenses rising significantly faster than revenue growth.

All eyes on Thursday
When Proto Labs reports earnings on Thursday, Foolish investors should focus on how the underlying business is performing, rather than how investors react to the news. Come Thursday, be on the lookout for the number of product developers Proto Labs served, how its European operations fared, and whether its gross margin trended lower.