Intel isn't as diversified away from the PC market as the headline numbers might suggest.

On chip maker Intel's (INTC -1.13%) most recent earnings call, CFO Stacy Smith remarked that over 70% of the company's operating profit came from the company's Internet of Things, data center, and NAND businesses. The purpose of highlighting this number was likely to give the impression that the company has substantially diversified its revenue base from the declining PC market.

While Intel is indeed seeing its business mix shift away from the PC as the company's "growth" segments, well, grow and as the PC market declines, the 70% figure doesn't quite sit right with me. Although mathematically accurate, I believe it understates Intel's dependence on the PC market. Allow me to explain.

The "client computing group" sleight of hand
Prior to the first quarter of 2015, Intel used to break out its PC client group as a separate business unit from its mobile and communications group. The PC client group brought in the majority of the company's revenue and contributed substantially to the company's operating profit.

The mobile and communications group, on the other hand, generated minimal revenue (even dipping into negative territory in the final quarter of 2014) and steep operating losses.

To understand the "trick" that Intel is performing, I would like to direct your attention to the table below from Intel's fourth quarter 2014 earnings release: 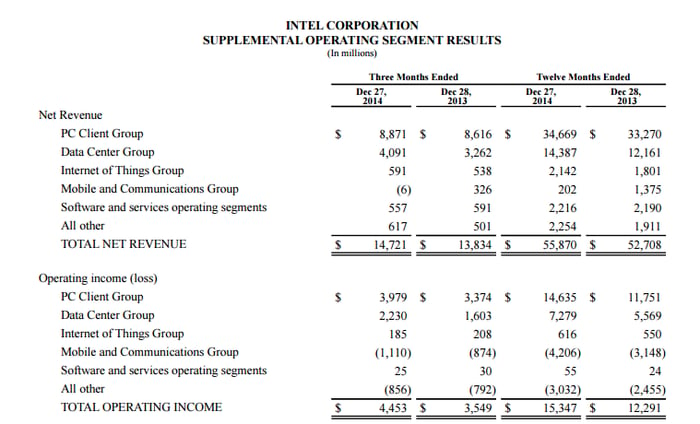 But, of course, a quick sanity check would tell you that these statements aren't all that useful.

The problem is that in these numbers Intel has two reporting segments -- in this case "all other" and the "mobile and communications group" -- that are running substantial operating losses, making the math calculating the operating income percentage contributions from the various segments a bit weird.

Here are the percentage contributions by segment to the company's operating profit in the quarter:

While the 70% number might make it seem as though Intel has effectively diversified away from the PC market, the company's client computing group alone still brought in 55.3% of the company's operating profits in the quarter. The reason for these weird numbers is, once again, the fact that there is an "all other" segment that is losing money, which inflates the percentage of the total profit pool to which the other segments appear to contribute.

It gets even better, though. If we assume Intel's former mobile and communications group lost about $1 billion in the quarter (this is just a ballpark estimate), then this would mean the former PC client group brought in about $2.6 billion in operating profit.

That's still more than any other of the company's operating segments.

Intel is still a PC-dependent company, whether we like it or not
At the end of the day, Intel still depends very heavily on the sale of PC chips. Intel has done a good job capturing growth in other areas, most notably in the data center, but when a business as large as Intel's PC processor business declines, it takes a lot to offset those declines.