The medical-device maker that specializes in neurology and care for newborns reported revenue of $91.9 million, slightly higher than the top of the range of $89.5 million to $91.5 million that management guided for at the end of the second quarter. That was only a 6.5% year-over-year increase, but the lackluster growth was partially due to changes in the dollar, which affect foreign sales. At constant currencies, year-over-year revenue grew by a more-reasonable 8%.

Natus doesn't break out individual product sales, so we don't really know exactly what's driving sales, but management made some comments about its new service businesses that are clearly making nice contributions to revenue growth.

Natus' Peloton service, which provides newborn hearing screening for hospitals that would rather outsource the service instead of buying Natus' ALGO screener and doing it themselves, added 12 new hospitals in the second quarter, bringing total companies under contract to 80. Natus is shooting for Peloton, which is a little more than a year old, to have about 100 hospitals at the end of the year.

NicView, which Natus only purchased in the first quarter of the year, is also poised to add substantial revenue. The service's video monitoring for neonatal intensive-care units is now in a little more than 50 hospitals in the U.S., and Natus has quotes out to 80 more. Neonatal intensive-care units are clearly an easier grab for the service, which caters to friends and families who want to see the newborn, because babies in the unit stay in the hospital longer and access is limited. Natus thinks there could be an opportunity to move into the well-baby area, as well.

Natus' non-GAAP net income actually increased by a more-impressive 25.8%, but the earnings-per-share number was dragged down by an increase in share count due to employee options that are clearly in the money with shares up 78% during the last year. The earning-per-share number would have been even worse if the company hadn't repurchased $4.2 million worth of stock during the quarter. 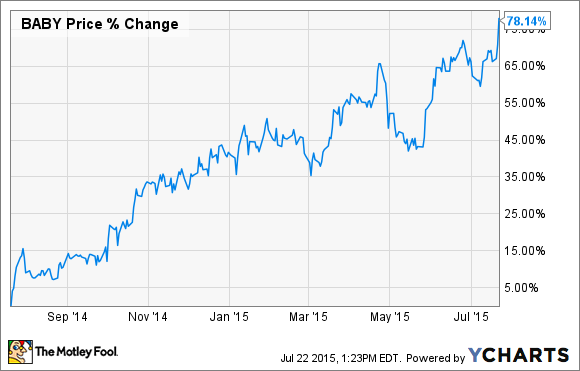 Natus was able to book the larger year-over-year increase in income compared to revenue by driving its non-GAAP gross profit margin to 63.2%. Manufacturing in Europe acts as a natural hedge against lower sales when the dollar strengthens, because it lowers Natus' costs. Having a larger percentage of sales come from the U.S. in the second quarter also helped increase the gross profit margin because, unlike foreign sales, U.S. sales don't require middlemen distributors that get a cut of the profits.

Non-GAAP operating profit margin came in at a solid 18.5%, thanks to the aforementioned increases in Natus' service businesses, as well as further cost reductions like closing down a facility that it received in an acquisition. Natus looks well on its way to reaching its goal of 18% operating profit margin goal for 2015, and 20% for 2016.

Looking forward
Natus is obviously pushing the service business model hard, but it certainly isn't abandoning medical products. In the second quarter, the company received FDA clearance to start selling its Quantum amplifier, which monitors brain function for patients who have epilepsy and seizures.

There's a possibility of adding further growth externally, but management said that it's only considering smaller tuck-in acquisitions this year. There won't be any major acquisitions this year despite the company sitting on $73.2 million in the bank, and an inflated stock price that it could use to help pay for a purchase. Natus will likely use some of the cash to continue buying back stock to compensate for vesting employee options. There's still $20 million available on a buyback that the board authorized in June.

Given the strong quarter, management increased 2015 non-GAAP earnings-per-share guidance to $1.50 to $1.52 per share from previous guidance of $1.47 to $1.51 per share. Revenue guidance remained unchanged given that the dollar has further strengthened.