Please ensure Javascript is enabled for purposes of website accessibility
Log In Help Join The Motley Fool
Free Article Join Over 1 Million Premium Members And Get More In-Depth Stock Guidance and Research
By Demitri Kalogeropoulos - Jul 23, 2015 at 10:00AM

Why the software giant's shares jumped after its second-quarter earnings report.

Wall Street found plenty to like about VMware's (VMW 0.38%) second-quarter results. The stock gained 5% after it announced sales gains and said that licensing revenue growth for its virtualization software was improving.

CEO Pat Gelsinger held a conference call with analysts to provide detail on the second-quarter results. Here are a few key points that VMware's management wanted investors to know.

We saw very good growth in vCloud Air, solid growth around [network virtualization software] NSX, which now has more than 700 customers, and in vSphere which has more than 2,000 customers. -- Chief Operating Officer Carl Eschenbach

Up 13%, sales ended the second quarter at the top of management's April guidance. Executives said it was VMware's growing product portfolio that made the difference.

Newly acquired AirWatch helped end-user bookings jump 30%. The vSphere product pushed cloud management services up by double digits. And the NSX customer base spiked, which led the way to growth for network virtualization solutions. VMware now has "the most complete portfolio in the company's history," Eschenbach said.

We saw solid execution in our large deals. Enterprise agreements were approximately 39% of total second quarter bookings which was the second highest quarter contribution ever. -- Eschenbach

Large license agreements are becoming a bigger part of VMware's business, rising to 39% of bookings from 37% a year ago. This quarter, the company inked seven deals of more than $10 million apiece. Besides having a relatively big sales impact, management likes these deals, as they add predictability to the revenue stream while serving as a tool to roll out new products to the client base.

Latin America is up, China is down

Asia-Pacific performed best, followed by the Americas and EMEA [Europe, Middle East, and Africa]. In Asia-Pacific, we were particularly pleased with our performance in Japan and Southeast Asia. For the first time, though, we saw a significant slowdown in our China business. -- Eschenbach

VMware's strongest geography this quarter was the Americas. Enterprise deals, both involving renewals and new customers, led the way for that area. At the same time, soft demand from China had a negative impact, but that was outweighed by big gains in neighboring countries. Management expects China to remain a weak market for its products through at least the second half of the year.

During the quarter we repurchased approximately 4.7 million shares of stock for a total of $412 million. -- Chief Financial Officer Jonathan Chadwick

Management kept up their aggressive stock buyback spending this quarter. The $412 million they allocated was in line with the prior quarter's $438 million. VMware expects to spend $1.25 billion this year on its own stock, compared to $700 million in 2014. 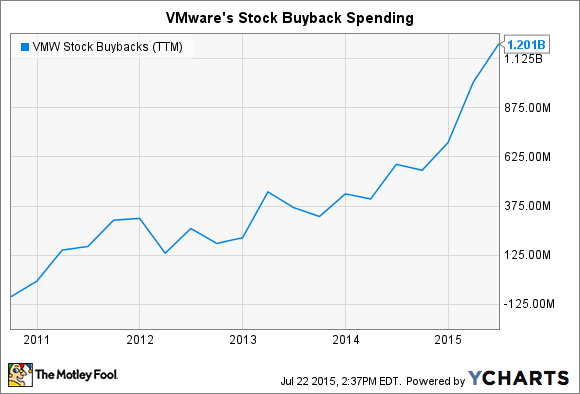 Outlook for next quarter and beyond

While VMware posted an impressive double-digit sales gain throughout the first six months of the year, management sees even quicker growth in the back half of 2015. The looming end of the federal government's fiscal year in the third quarter should help, while the fourth quarter will get a lift from new product introductions.

There also appears to be a seasonal boost for the business that's lifting results during the fall months. VMware booked 16% growth in 2014's fourth quarter and a 20% gain in the final quarter of 2013. "The second half is shaping up to be stronger than the second half," according to Chadwick. "We saw a similar performance in 2013 and 2014," he said.

Demitrios Kalogeropoulos has no position in any stocks mentioned. The Motley Fool recommends VMware. Try any of our Foolish newsletter services free for 30 days. We Fools may not all hold the same opinions, but we all believe that considering a diverse range of insights makes us better investors. The Motley Fool has a disclosure policy.