Way back in January 2013, Apple (NASDAQ:AAPL) CEO Tim Cook made a prediction: "China is currently our second largest market. I believe it will become our first. I believe strongly that it will." It was quite a bold call considering the fact that Apple had generated $27.4 billion in trailing-12-month revenue in Greater China at the time, compared to the $63.8 billion TTM revenue base it was enjoying in the U.S. Its mature U.S. business was more than double the size, so the growing Greater China segment had a lot of catching up to do.

In the years since, catching up is precisely what Greater China revenue has been doing.

Slow and steady wins the race
Apple's recent performance in China has been nothing short of astounding. That's particularly impressive considering the broader macroeconomic slowdown that's occurring in the Middle Kingdom as we speak. Last quarter, Greater China revenue skyrocketed by an incredible 112% to $13.2 billion. iPhone unit sales were up 87% while the Chinese smartphone market grew by just 5%.

The company has been expanding its retail footprint, and now has 23 Apple Stores in Greater China. It plans to have 40 Apple Stores by mid-2016. Chinese consumers also have a noticeable fondness for gold, and Tim Cook recently confirmed that this is why the company introduced gold color options in its lineup in 2013.

For all of these reasons and more, this is how Apple's Greater China business has been faring compared to its domestic business. 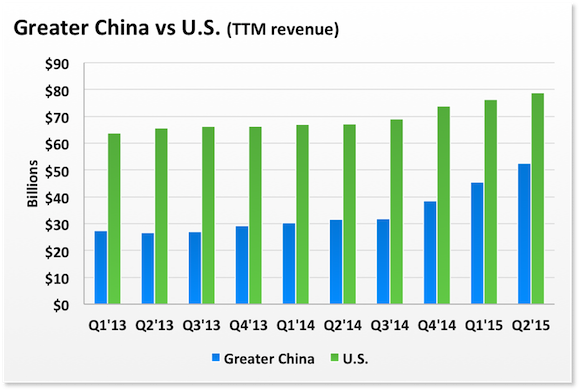 Word on the Street
There's been some debate over whether or not Apple should be worried about the macroeconomic environment in the Middle Kingdom. In fact, Cowen analyst Timothy Arcuri downgraded Apple shares following the results specifically due to "China demand concerns." Arcuri believes that "evidence of a widespread demand reset from China is mounting," pointing to metrics like auto sales or results from a handful of other technology companies.

But comparing Apple to other companies without any other context, particularly after Apple just put up triple-digit sales growth, seems misplaced. Apple isn't like other companies. Other analysts aren't fazed. Quite the contrary, many were rather impressed by Apple's performance in China given the macroeconomic environment.

Tim Cook isn't fazed either. He reiterated earlier this week that Apple's "fundamental view" is that China will become Apple's largest market in the future. LTE penetration is still modest at just 12%, and as that figure rises so will smartphone usage and engagement with activities like video, reinforcing iPhone adoption and upgrades alike.

It may not be next quarter or next year, but one day Apple's business in Greater China does indeed seem destined to overtake its U.S. business.