OnDeck (NYSE:ONDK) was founded to fill a niche in small-business lending. Its founder, Mitch Jacobs, believed that it was possible to use algorithms to make loans that banks find increasingly difficult to make. His simple premise was that OnDeck could be the lender of choice to businesses in need of $100,000 or less.

OnDeck now believes its target market to be businesses in need of $250,000 or less. Based on data from the FDIC, lenders currently originate about $180 billion of these loans each quarter, and OnDeck believes there could be $80 to $120 billion of additional demand still unmet by existing lenders. 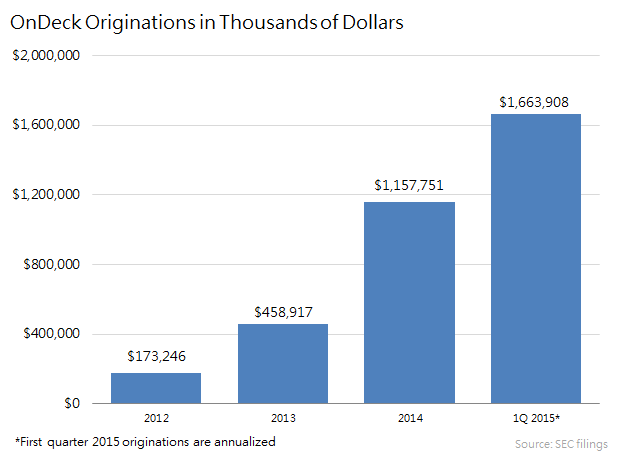 The company is slowly capturing a greater share of the small business lending market. In 2014, it completed just under $1.2 billion in loans, a small portion of a market it believes could be as large as $1.2 trillion annually.

How OnDeck loans work
OnDeck's core product is its small business term loan. This product is OnDeck's sweet spot, because the term loans are typically too small and too risky for banks to underwrite.

Repaid with daily or weekly payments over a period of six to 18 months, OnDeck will extend a term loan to a business with more than $100,000 in annual sales, provided that at least one owner of the business has a credit score of 500 or better.

The relatively low credit score and revenue requirements result in very expensive borrowing terms. I'll use data from a real term sheet OnDeck supplied to one of its clients to show how its term loans work.

The details were as follows:

Notably, OnDeck's term loans do not carry an interest rate like a traditional bank loan. Rather, the company prices its loans based on a "cents per dollar" fee, which serves as interest. When you convert the fee to an annualized interest rate, the borrower would pay an effective interest rate of 88.7% per year on the loan above.

Thus, OnDeck remains a costly source of financing for many small businesses. Its loans to its smallest customers are significantly more expensive than the average credit card, and much higher than secured bank loans. But its requirements are minimal -- most banks wouldn't touch a borrower who has a 500 credit score. OnDeck will.

Businesses with $100,000 in revenue per month ($1.2 million per year) and three or more years in business can qualify for a "Term 24" loan, which is a 12- to 24-month term loan with a stated interest rate of 19.9% to 39.99% per year. Unlike its core product, these loans do not use a cents-per-dollar interest rate structure, and thus cost much less than its core term loan.

Likewise, businesses with varying borrowing needs may be better suited for its lines of credit. Companies in business for at least one year with annual revenue of $200,000 may qualify for a line of credit at a rate of 29.99% to 49% per year, repaid with weekly draws out of your business's checking account.

The table below summarizes the different types of loans and the requirements and costs for each type.

Should you use OnDeck?
Given the high interest rates and a required personal guarantee (the business owner is personally responsible for repaying the loan if the business cannot), OnDeck is probably best used only as a last resort -- a lender to turn to after exhausting all other options. The personal guarantee makes it such that any loan from OnDeck is essentially a personal loan.

Keep in mind that a credit card will generally offer better terms than OnDeck. A credit card might carry annual rates of 20% to 30% at the worst, which is equal to and, in many cases, less than the rates OnDeck offers its borrowers. Furthermore, a credit card requires your business to make payments monthly, generally based on a five- to 10-year amortization period, whereas OnDeck requires daily or weekly repayments to repay loans in less than two years.

Given it costs nothing to get a quote, OnDeck may be a great starting place to find financing for your small business. But if your business is profitable, and you have good credit, I suspect you'll find better terms from traditional lenders. Borrower beware.