The global smartphone market continues to put up healthy growth, with worldwide unit volumes increasing by 12% to 337.2 million. That sum is the second highest quarterly total on record (with the busy Q4 2014 holiday quarter being the highest). Here are the top five players:

That table alone may not illustrate Samsung's slow but steady fall from dominance, seeing as how it still technically has a lead of nearly 26 million units over Apple.

Hitting Samsung where it hurts
Apple, Huawei, and Xiaomi each dramatically outpaced the broader market, as each company continued to grow their overall market share. Apple is the only smartphone vendor that does not participate in the low-end market, while all other Android players are more than happy to take what they can get. This is precisely why Apple grabs an estimated 92% of all operating profits in the industry.

Samsung plays throughout the entire smartphone spectrum, and many of its units are in the low end. Specifically, Apple has been aggressively stealing share from its biggest rival in the market for larger phones and phablets thanks to the iPhone 6 and 6 Plus. This is precisely why Samsung's mobile profits have been under strain. The company's mobile division saw operating profits fall 57% in the first quarter, and total operating profits are expected to fall again in the second quarter. Mobile has become Samsung's most important division when it comes to profitability, accounting for 46% of total operating income in the first quarter, so challenges here weigh disproportionately.

Zooming out
Taking a step back beyond just this quarter, it's useful for investors to look at the longer-term trends at work here. Here are how the two companies have fared over time in total unit shipments. 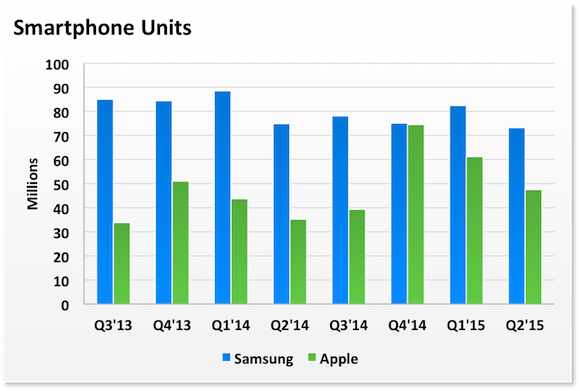 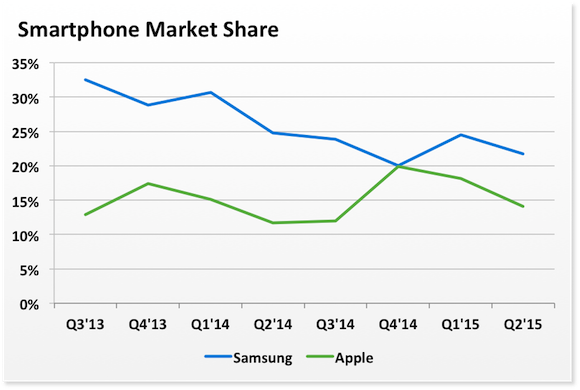 While Apple's share mostly fluctuates within a somewhat predictable range, Samsung's is undeniably being eroded. This is occurring in the high end where Samsung is losing share to Apple, as well as the low end where Samsung is losing share to Xiaomi and Huawei. As you can see in the second quarter figures, Apple, Huawei, and Xiaomi continue to build momentum in each of their respective markets.

Huawei recently reported that its smartphone shipments for the first half of the year soared 39% to 48.2 million, and Huawei is building the next Nexus flagship. Slowly but surely, the age of Samsung's dominance is coming to an end.