The online payments giant is making meaningful strides and eBay shareholders automatically got a piece of the new company.

After 13 years of marriage, eBay (EBAY -0.02%) and PayPal (PYPL -2.49%) have officially divorced. The tax-free split has been a long time in the making. In early 2014, activist investor Carl Icahn pressured eBay to spin off its fast-growing payments business, saying that a split would create more value for shareholders. eBay's then CEO, John Donahoe, wholeheartedly disagreed and with backing from eBay's board issued a shareholder letter in which he argued that "Our shareholders and our customers are best served by keeping PayPal and eBay together."

Icahn, as we know, took home the win. And as of this week, PayPal is once again trading on the Nasdaq as a stand-alone public company. However, it is a vastly different world from the one PayPal left more than a decade ago when it was acquired by eBay. For starters, PayPal is no longer the only online payments processor on the block. Not only are there literally dozens of rivals in the space now, but also many of these are deep-pocketed tech names such as Apple and Android Pay, both of which have seemingly endless hoards of cash at their disposal.

If nothing else, this certainly makes for an interesting landscape as PayPal ventures out on its own and eBay shareholders automatically got a stake in this strong company.

Distance makes the heart grow fonder
If you owned shares of eBay pre-spinoff, good news: You now automatically own shares of PayPal, too. For every share of eBay stock you owned ahead of the split, you now have one share of PayPal to match. That may not seem like a lot, but shareholders were receptive to PayPal out of the gate and have given it a market cap of $45 billion. That is roughly 30% above eBay's current market cap of $34 billion.

One important thing to note is that PayPal will still be the payments processor of choice on eBay's marketplace going forward. PayPal and eBay will also keep close relations in the antifraud department, as they have vowed to continue sharing information regarding customer transactions in an effort to better protect customers shopping eBay's marketplace. This is not only good for customers, but also for new PayPal shareholders because the company gets to keep the bulk of eBay's business. Last year, eBay delivered more than 30% of PayPal's revenues and helped drive new membership to PayPal's platform. Bottom line: eBay and PayPal will still be in each other's lives, despite operating as separate entities.

A brave new world
As for the eBay shares still in investors' portfolios, the future could perhaps hold a buyout deal. This is merely speculation, however, without the PayPal segment under its belt eBay boasts a much cheaper valuation, which makes it a more attractive acquisition target. 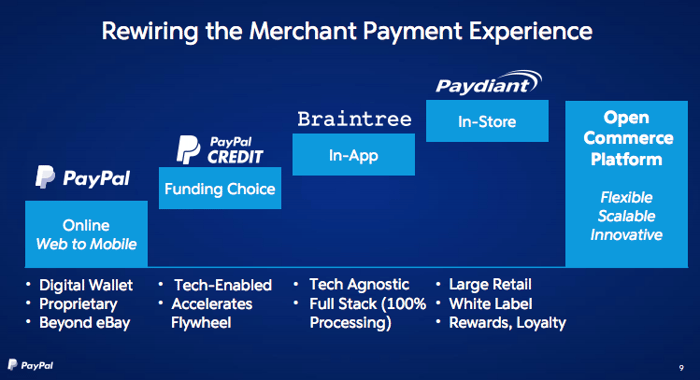 Meanwhile, PayPal stepping out on its own gives it a huge advantage over other, smaller firms in the digital payments space today because it is already a leader in online payments. PayPal processed more than $1 billion in transactions in the second quarter alone, and now operates in 203 markets and 30 currencies worldwide. PayPal processed 4 billion payments last year, with one in three adults in the U.S. choosing to pay with a PayPal account.

The online payments giant is also making meaningful strides in other areas including mobile and digital currency. In 2014, PayPal processed nearly 1 billion mobile payments. It also jumped into the services industry with its acquisition of Braintree. If you've ever used the mobile driver app Uber, then you have used PayPal's Braintree to seamlessly pay for your international and U.S. rides.

These growth avenues together with PayPal's strong balance sheet (think $6 billion in cash and no debt) make it a promising long-term bet for investors today. Ultimately, this is a win-win for eBay shareholders and the future of both companies as they embrace their newfound independence.