Apple CEO Tim Cook is still a believer in the iPad. Should investors be, too? 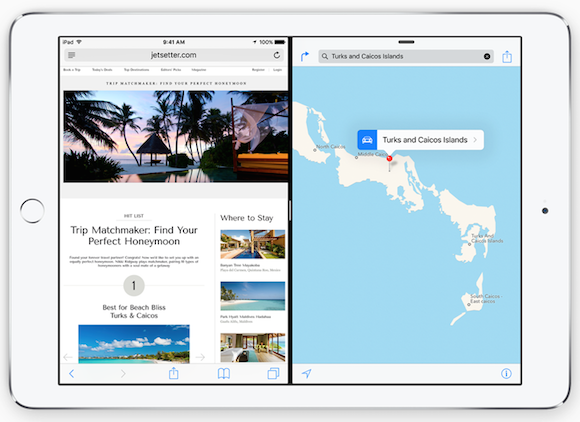 I believe in Tim Cook. I believe in tablets as a viable form factor for computing. I believe Apple (AAPL 0.00%) makes the best tablet on the market. So, when Tim Cook assures investors that he remains extremely bullish on the iPad's long-term trajectory, and that the device's recent performance is little more than a speed bump, I believe him:

I am still bullish on iPad. What we've got with iOS 9, there's some incredible productivity enhancements coming in with split view and slide over and picture-in-picture. These things are incredible features. The enterprise business is clearly picking up and more and more companies are either contracting for or writing apps themselves. I think and I believe that the iPad consumer upgrade cycle will eventually occur because as we look at the usage statistics on iPad, it remains unbelievably great. I mean, the next closest usage of the next competitor, we're six times greater.

And so these are extraordinary numbers. It's not like people have forgotten iPad or anything. It's a fantastic product. So I see a lot of runway. And as I look geographically, where we've been doing really good in the emerging markets, our share is still not high in any of them, and so there's a lot of headroom there as well, as there is in most developed markets as well. And so I look around, I see opportunity left and right. And that's what we're focused on.

That's why it's so painful to watch iPad sales stumble with weakness.

Pain
Make no mistake, the iPad is stumbling. Consider this chart of quarterly unit sales that goes back five years to the device's inception. 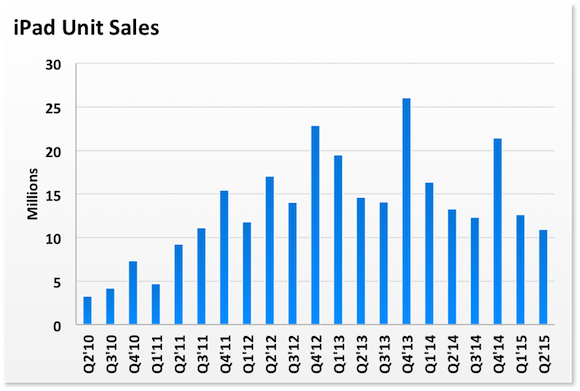 The downward trend over the past couple of years is undeniable. While Apple is able to continue growing the iPhone business like clockwork each year with its tick-tock upgrade cycle, it hasn't been able to prop up iPad sales in the same way. Annual refreshes haven't been as effective compared to the iPhone, and even moving downmarket with the iPad Mini hasn't been able to sustain growth. Last quarter was the sixth consecutive quarter of negative year-over-year growth.

On the last call, Apple pointed out that it does not participate in the low end of the tablet market. The Mac maker enjoys a 76% market share in the U.S. for tablets priced above $200, according to NPD. But Apple's iPad average selling price has been steadily (and somewhat expectedly) declining following the introduction of the iPad Mini in 2012, hitting a fresh all-time low of $415 last quarter. 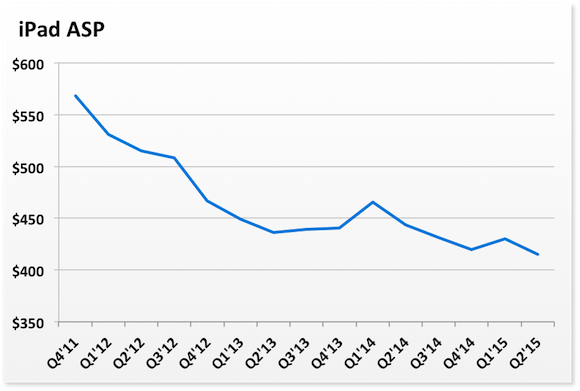 That suggests not only that the product mix continues to shift toward the Mini and lower-priced models, but also that Apple won't be able to command the same level of pricing power that it does with the iPhone. The tablet market could be more susceptible to pricing pressure.

Gain
But what's also undeniable is how rapidly consumers adopted the new device. What's less clear: How long is the consumer upgrade cycle to which Cook referred? Intuitively, it makes sense that the iPhone business is more easily nurtured with regular updates. After all, consumers prioritize upgrades based on usage, and people generally use smartphones much more than tablets. People also use PCs more than tablets. While the tablet upgrade cycle will likely be shorter than the PC upgrade cycle, in part because they typically cost less but also because they are a newer category and the overall performance gains each year are much more meaningful.

The iPad is now five years young, so perhaps buyers of the earlier models are now looking at their tablets and considering an upgrade. Cook is encouraged by the customer satisfaction and usage statistics, since satisfaction and usage are the foundations of an upgrade decision. On top of that, adoption in emerging markets is still modest. Those consumers haven't even gotten on the iPad upgrade track.

Apple is only now beginning to tackle the enterprise market in earnest. The IBM partnership continues to blossom. Big Blue released 13 new MobileFirst apps tailored for specific industry verticals last quarter, bringing the total to 35. Apple expects to have approximately 100 of these types of apps available by the end of the year.