NXP Semiconductors (NASDAQ:NXPI) is set to report second-quarter results after Wednesday's closing bell. The Dutch chip maker hasn't flubbed an earnings estimate since 2011, but the company's largest target markets are in turmoil right now. What should NXP investors be looking for in this report?

Here are three of NXP's most important business themes at the moment.

The smaller JAC transaction will simplify NXP's business and add $1.8 billion of cash to its coffers. That will help the company pay for Freescale. That deal is structured as a combination of cash and freshly printed NXP stock, with approximately $2 billion earmarked for the cash-based portion.

Both deals are expected to close in the second half of 2015, pending regulatory approvals. Shareholders of both Freescale and NXP already waved that merger through the turnstiles with an "over 99%" approval rating.

So, these transactions appear to be firmly on track, but management is likely to devote some of this week's earnings announcement to provide a meaty update on how they're shaping up.

In the first-quarter announcement three months ago, for example, the merger had been announced midway through that quarter, leaving little time for significant developments. Still, NXP sketched out the top-level management structure for the new company.

This time, we're looking at a full quarter of progress -- or lack thereof. You should expect a much richer progress update this time. 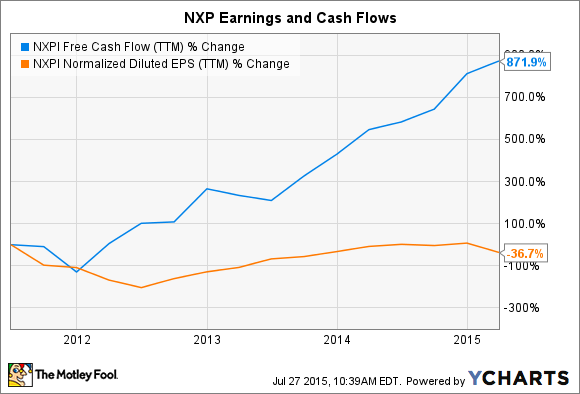 Earnings and cash flows
Over the last five years, NXP has grown its free cash flows nine-fold while earnings actually fell 37%. All of this was done on a modest 33% revenue increase.

Translated into annual growth rates, the compound annual growth rate for NXP's free cash flows works out to 58%. Sales have grown just 6% per year. Again, earnings are falling over this five-year period, so there's no earnings growth to speak of.

From a Foolish perspective, that's great. Cash flows can be put in the bank or reinvested to drive further business growth. Earnings are used for tax accounting. Together, low earnings and high cash flows point to a very tax-efficient business model. NXP most certainly qualifies for that badge of honor -- in the long term.

More recently, NXP's earnings have tended to outpace its cash flow growth. It's unclear how the Freescale merger will play into these figures since NXP hasn't issued any cash guidance for the new business.

That being said, NXP's earnings increased 38% year over year in the first quarter, while free cash flows only rose 29% higher. I'd prefer to see those growth rates switched up -- both in the second quarter that's under review here and in future periods.

Updated guidance
And on that note, the first-quarter report saw NXP taking a step in the direction of greater transparency. The company provided full-year sales guidance for the first time ever, giving investors and analysts a rough framework for analyzing what's next.

On the whole, that's a slowdown from the 11.9% sales growth NXP expects to deliver in the second quarter. Interestingly, analysts currently expect the company to exceed the high end of its own second-quarter revenue guidance without exceeding the full-year guidance target. Somebody will be wrong. Updated official projections will help us figure out exactly how.

NXP still doesn't offer earnings targets for the full year, but did set the midpoint of its second-quarter guidance at $1.38 per diluted share. Here, analysts currently set their sights just a bit lower at $1.37 per share. None of the 23 Wall Street firms that cover this stock has adjusted their second-quarter earnings outlooks in the last 30 days.