Goldman Sachs (NYSE:GS) recently announced its intention to venture into the consumer lending business, and appears to be committed to making a big impact. It's easy to understand why the company might want to do this -- after all, marketplace lending is growing at a rapid pace. With that in mind, here's what investors need to know about Goldman's upcoming personal lending business and what it could mean to the company's bottom line.

Goldman plans to offer loans directly to consumers through a yet-to-be-developed platform. Unlike the rest of Goldman's business, which caters to high net worth individuals, the lending business will be targeted at the average consumer. Loans are projected to be in the $15,000-$20,000 range, and will target similar customers as those currently served by peer-to-peer lenders such as Lending Club and Prosper.

It seems Goldman has big plans for this new venture. The bank has hired Harit Talwar, formerly of Discover, to develop and lead its online lending business. Goldman is expected to hire as many as 100 more people to work on this project, and the lending marketplace is expected to be up and running at some point next year.

The business is still in its early planning stages, but it's likely that the loans will be made online or possibly through an app to borrowers. It's unclear whether or not Goldman would hold the loans on its balance sheet, or if it will package and securitize the loans with the intent to sell them to investors.

It's also unknown if Goldman Sachs plans to put its own name on the new venture, or if it intends to create a new brand.

The potential of Goldman's personal lending business
The personal lending business certainly has potential. There are currently about $843 billion in outstanding consumer loans, and research suggests that about $209 billion in loans are potentially available to new online lenders. This amount represents about $4.6 billion in potential profit, so even if Goldman could capture even a small percentage of this market, it could be a significant boost to its bottom line.

Currently, the "marketplace lending" business is dominated by about 150 start-ups, many of which use the peer-to-peer (P2P) business model in which individual investors fund the loans. The companies simply act as facilitators, earning about 1% of their loan amounts and passing the rest to investors. Industry leader Lending Club's investors can expect to earn returns between 5.03% and 9.73%, depending on the risk level of the loans they choose to invest in, so there are some healthy returns to be had.

In addition to the potential for income from the loans themselves, a successful consumer lending business could lead to many other possible revenue generators. For instance, Goldman could develop additional products to cross-sell to its investors, or could venture into other aspects of consumer lending, such as auto loans and mortgages.

Why it could work
There are a few reasons to believe that this could become a success for Goldman.

First off, Goldman Sachs is a massive institution, with $1.18 trillion in assets under supervision and virtually unlimited access to cheap deposits to fund loans. Goldman could sell low-interest CDs in order to fund the loans, which would be an excellent source of cheap financing that doesn't have a big impact on reserve requirements. Because of its high credit rating and strong balance sheet, Goldman can pay less for financing than its competition, which can lead to higher spreads (profits).

Second, Goldman has the advantages of being able to attract top talent and having the best technology at its disposal. If Goldman is able to create a proprietary risk assessment method that's more effective than those of its competitors, it could be a big advantage in two ways. Goldman would be faced with a lower default rate, which would lead to higher profit margins. And the increased accuracy of credit assessments would allow Goldman to offer better pricing than its competitors.

As far as industry trends go, demand for this type of lending is growing rapidly. Industry leader Lending Club has grown its business from $46 million in the first quarter of 2011 to more than $1.6 billion most recently. 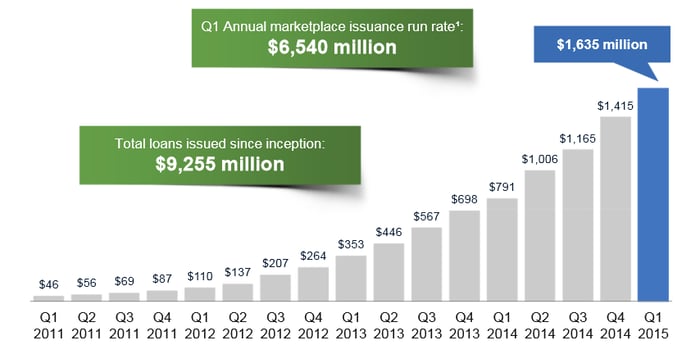 And while the marketplace lending business initially attracted primarily younger people, consumers of all ages have begun to adopt non-traditional personal loans like these.

Finally, as I alluded to earlier, this venture opens up an area of the consumer finance market that has been untapped by Goldman Sachs until now. While I believe that Goldman's core business will endure, there is no reason why the company can't create a new brand that caters to the "average" consumer with loans as well as other banking products.

Obstacles to success
It's important to mention that this isn't without risk. Since this endeavor is outside of Goldman's "comfort zone", it could take substantial capital investment, as well as more trial-and-error than the bank is counting on. Also, Goldman could run into higher regulatory costs than its competitors. Larger banks have different compliance and capital requirements than smaller ones, so this could potentially become a burden.

If all goes well, this could be the next leg up for Goldman Sachs' profits
I applaud Goldman's decision to step outside of its "bubble" and pursue a growing area of consumer finance. With Goldman's access to cheap capital, the high potential for profits, and the bank's general ability to attract the best talent, I'd say there is a good chance that this will be a slam dunk for Goldman, which could create a brand new revenue stream.