To get the bigger picture on TI's place in the semiconductor market, you should really dig into management's conference call with Wall Street analysts. Or you could wait for a distilled rundown of the core insights shared on that call. That's exactly what you're looking at here.

Here are five of the most important tidbits Texas Instruments revealed in the second-quarter earnings call.

"But the signs that we're seeing suggest to us that we are in a traditional market, macro-driven, not necessarily on a semi-cycle per se. We continue to see lead times that are quite short, cancellations remain low, distributor inventories are at historically low levels.

"So all things put together, I think what we're just seeing is a growth rate on a macro level that's probably slower going into the second half than what people thought coming into the first half."

In other words, TI's leaders are pretty sure that the recent weakness across the semiconductor sector isn't a semiconductor problem at heart. Instead, it's simply the demand for chips rising and falling with the larger economy. You know, how things are supposed to work.

If you buy into this macro-powered explanation -- and for the record, I do -- you can feel free to go looking for semiconductor stocks in Wall Street's bargain basket. As long as you're focusing on companies with strong businesses and solid balance sheets, you should enjoy a nice bounce when the global economy starts looking healthy again.

There's nothing fundamentally wrong with this sector, even if Mr. Market is treating chip stocks like red-headed stepchildren this summer. 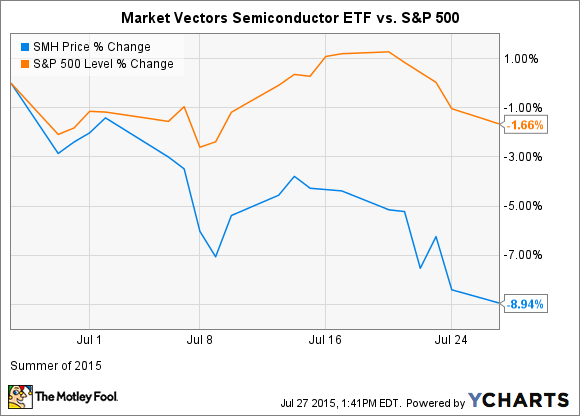 "Embedded Processing revenue declined 2% from a year ago after 10 consecutive quarters of year-on-year growth. This decline was due to the weakness in wireless infrastructure equipment for the processor product line," said Dave Pahl, TI's head of investor relations.

"Communications equipment declined primarily due to the wireless infrastructure sector which was down about 50% from a year ago, even weaker than we had expected going into the quarter."

This quote takes on a deeper meaning once you've digested the first comment on macro trends in the industry.

Long story short, telecoms are building and upgrading their networks at a slower pace than anyone was expecting. And it's not like anyone was looking for a massive growth year in 2015, given that the next major wireless spectrum auction falls in 2016 and 5G networks remain a mirage on that industry's horizon.

But even so, network investments are falling way short of expectations that were low to begin with.

When -- not if -- the telecom industry gets back to the business of investing in better networks again, that switch will spark a boom in several other sectors. Texas Instruments sits near the far end of that food chain, building signal processing chips to power the hulking telecom infrastructure machinery. So the company must take a very long-term view of the telecom market, while staving off unexpected lulls like the current one.

"TI's U.S. entities own 82% of our cash," March said. "Because our cash is largely onshore, it is readily available for a variety of uses, including paying dividends and repurchasing our stock."

Remember the clamor around tech companies stashing most of their cash in offshore accounts? Texas Instruments doesn't play that game.

The most important part of this quote comes at the very end. The way TI funnels its hard-won cash into American bank accounts gives management the freedom and flexibility to run the business as efficiently as possible.

Sure, TI might save some tax dollars by keeping its international profits in Chinese accounts. 44% of TI's overall sales in 2014 came from Chinese customers, and only 12% from true-blue American clients. TI delivers its chips where customers plan to build devices around them, and that overwhelmingly means collecting sales abroad.

But the company prefers to pay its repatriation dues and then manage most of its cash assets close to home.

Worth it? Hold that thought. I'd like to look at the damage done on that heavily international revenue stream by overseas currency translation trends.

The current course of currency effects

"While strength in demand varies by end markets, our market in total is expected to be weaker year-over-year in the third quarter than it was in a second," March said.

"This includes a negative impact of about $40 million due to changes in currency exchange rates."

Looking ahead, TI sees currency exchange headwinds slowing down somewhat. In the second quarter, that effect worked out to $45 million lower sales, and looking ahead to the third, management expects $40 million. In both cases, the damage from a very strong dollar amounts to just over 1% of total sales.

Compare and contrast this mild currency slowdown with fellow tech giant IBM (NYSE:IBM). In the recently reported second quarter, IBM reported a currency translation impact on its global sales of 9% or $2.1 billion.

From that perspective, it looks like TI's down-home cash management strategy is paying dividends.

"We believe free cash flow growth, especially on a per-share basis, is most important to maximizing shareholder value in the long term and will be valued only if it is returned to shareholders or productively invested in the businesses. And as we've noted, our intention is to return 100% of our free cash flow, plus any proceeds we receive from the exercise of equity compensation, minus net debt retirement.

"In the second quarter, we paid $354 million in dividends and repurchased $654 million of our stock for a total return of $1.01 billion. Total cash returned in the past 12 months was $4.08 billion.

"Outstanding share count was reduced by 3.1% over the past 12 months and by 40% since the beginning of 2005. These returns demonstrate our confidence in TI's business model and our commitment to return excess cash to our shareholders."

So we're back to the thought that I asked you to hold.

See, Texas Instruments wouldn't be able to return this much cash to its shareholders if large portions of its income were tied up in overseas accounts. I think it's fair to say that the willingness to pay repatriation taxes on an ongoing basis leads right up to shareholder-friendly strategies such as massive buybacks and very generous dividends.

I mean, IBM is well known for its generous dividend policies. That company doesn't mind taking out very large loans to boost its buybacks and payouts when management thinks the market conditions are right. You could say the same thing about Intel (NASDAQ:INTC). In both cases, this tendency to return ridiculous amounts of cash directly into shareholder pockets is a central reason why I own both Intel and IBM shares myself.

Maybe I should have settled on Texas Instruments instead. TI's dividend payout growth puts both of these shareholder-friendly tech titans to shame: 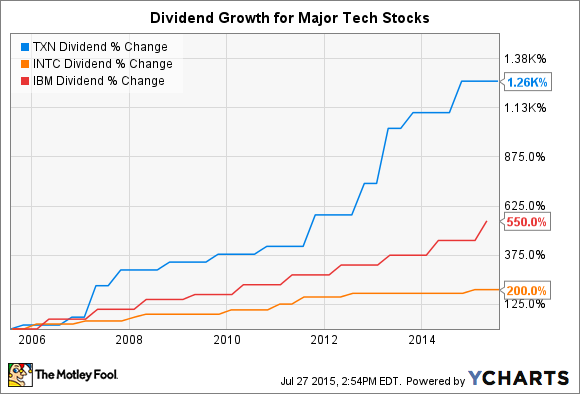