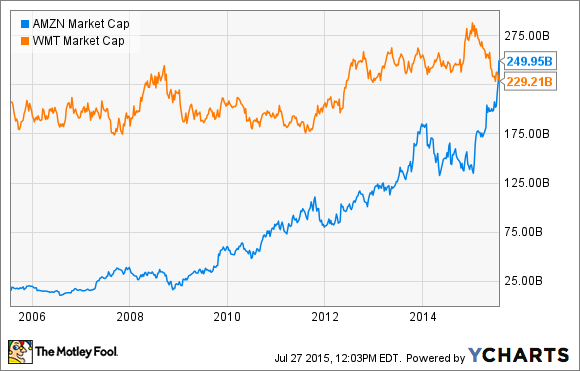 In a sign of the times, Amazon.com (NASDAQ:AMZN) recently surpassed Wal-Mart (NYSE:WMT) in market capitalization, meaning the online retailer is worth more than the mass merchant when measured by their respective values in the stock market. On the other hand, these kinds of comparisons can be tricky. Amazon is still making roughly 20% of Wal-Mart's revenue, so investors are assigning a much higher valuation to every dollar of sales from Amazon than from Wal-Mart.

What does this mean for investors going forward? Which one is a better investment at current prices, Amazon or Wal-Mart?

A tale of two retailers

Amazon and Wal-Mart are direct competitors in many important retail categories, but the two companies have their own different strategies and business models. Wal-Mart is a mature corporation relying on scale advantages and negotiating power to deliver consistent returns for investors over the years, while Amazon is all about growth and innovation.

Wall-Mart owns a massive store base, with over 11,400 locations around the planet, and the company is expected to make nearly $488 billion in sales during the fiscal year ending in January 2016. This gargantuan scale is a key strategic advantage for Wal-Mart. Many of the company's suppliers owe their very existence to the retailer, so Wal-Mart leverages this negotiating power to obtain conveniently low prices and favorable financing conditions for its products.

Price competitiveness is a crucial source of strength in discount retail, and Wal-Mart relies on its low costs to deliver "everyday low prices" for consumers. On the other hand, it's tough for such a giant in a mature industry to find growth opportunities, so revenue growth has been disappointing over the past several years.

Amazon is a very different story. The company is the undisputed king in online retail, and it's delivering truly spectacular growth rates: Sales during the second quarter of 2015 grew by staggering 20% to $23.2 billion, while sales in constant currency increased by an even bigger 27% from the same quarter last year.

Amazon has a massive user base, with 285 million active accounts around the world, and the company is consolidating its competitive position with big investments in key areas such as fulfillment infrastructure, technology, and digital content.

In addition, Amazon is the leading player in cloud computing infrastructure, a business that's generating explosive performance. Amazon Web Services produced $1.82 billion in revenue during the last quarter, a staggering 81% growth rate from $1 billion in the second quarter of 2014.

However, while profits were better than expected last quarter, Amazon operates with razor-thin profitability because of heavy investments for growth and a relentless competitive drive. Earnings tend to fluctuate widely from quarter to quarter, and they're notoriously hard to predict with consistency. This can be a major source of volatility for Amazon stock, and it has important risk considerations for investors in the company.

Which one should you buy?
When making investment decisions, investors need to always act in accordance with their own strategy and needs. Amazon and Wal-Mart have materially different characteristics, and they're dissimilar in terms of risk versus potential reward.

Wal-Mart offers an attractive entry price and a consistent track record of dividend growth. The stock trades at a P/E ratio below 15 times earnings over the past year, a considerable discount versus companies in the S&P 500 index and their average P/E ratio in the neighborhood of 19.

In addition, Wal-Mart paid its first dividend in March 1974, and it has increased payments each and every year since then. What started as a quarterly payment of $0.05 four decades ago has grown to $0.49 per share, for a 2.7% yield at current prices. Not bad at all coming from such a solid dividend payer.

Unless Wal-Mart manages to open new growth venues in the future, growth rates will most probably remain unimpressive, but the company has a lot to offer in terms of value, consistency, and reliability.

Amazon, on the other hand, is much more unpredictable in the short term because of the company's minuscule and volatile profit margins. Amazon stock is also selling for a price-to-sales ratio of around 2.5, which is nearly five times Wal-Mart's 0.5. When considering valuation and corporate strategy, Amazon is clearly a riskier investment than Wal-Mart.

However, Amazon offers enormous potential for growth in the years ahead. The company is at the same time one of the main drivers and a leading beneficiary of the e-commerce revolution, and it still has material room for expansion, both in the U.S. and abroad. Adding to Amazon's potential, cloud computing infrastructure promises to be another powerful growth venue for the company over the long term.

In a nutshell, it all comes down to what you're looking for. If you want an attractively priced stock with a consistent track record of dividend growth, then Wal-Mart is the right choice for your portfolio. Conversely, if you're looking for a business offering explosive potential for growth and disruptive innovation for years to come, then Amazon is a pretty good opportunity to consider.