Tucked into Coca-Cola's (NYSE:KO) second-quarter earnings release last week was a small sentence that announced a big shift in its capital-allocation plans. Three months ago, management said it planned to spend as much $3 billion on share repurchases. But now they're targeting a maximum of $2.5 billion. In contrast, Coke has allocated over $4 billion to stock buybacks in each of the past three fiscal years.

The $500 million spending cut wasn't due to surprisingly bad operating results. Sure, the sparkling and still beverage businesses are struggling in many markets. However, Coca Cola booked a 2% volume gain last quarter, up from 1% in the prior quarter. The results were "in line with our expectations and mark continued progress toward restoring momentum in our global business," CEO Muhtar Kent said.

Instead, Coke appears to be taking a conservative line on stock buybacks so that it has plenty of room to keep extending its 53-year streak of annual dividend raises.

Rising payout ratio
For a dividend aristocrat, Coke's payout ratio accounts for an unusually high percentage of earnings. Years of soft operating results have pushed net income lower. Meanwhile, a steadily climbing quarterly payment means that more of those shrinking earnings are being soaked up by the dividend: Coke paid out almost 80% of profit in dividends last year, up from 50% in 2012. 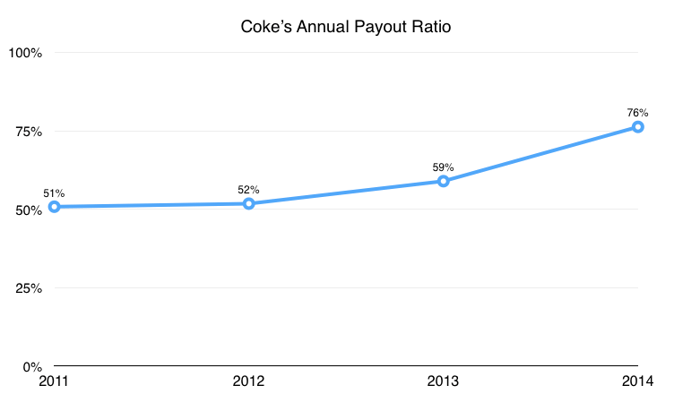 The dividend cushion is even smaller when you factor in the past few quarters of results. On a trailing-12-month basis, Coke's dividend payout ratio is above 90% -- substantially higher than other global consumer businesses, including Procter & Gamble (79%), McDonald's (74%), and Wal-Mart (43%). 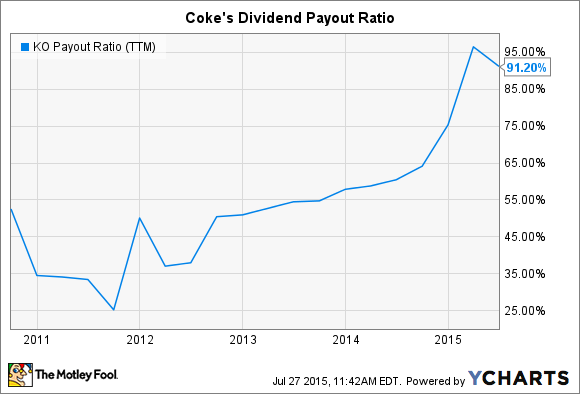 Things will probably get worse before they get better: Management expects a 13-percentage-point foreign currency drag in the third quarter and a double-digit pinch for the full year.

The good news for investors is that cash flow is rising even if reported profits aren't. Coke generated a record $5.1 billion in operating cash through the first six months of this year. Cost cuts have helped in that area, and so has a recent shift in the management of working capital that's added $400 million of annual cash flow to the operations.

Foolish bottom line
Coke's $6 billion dividend commitment seems shaky when judged against last year's $7 billion of net income. But it looks much safer when compared with the company's $10 billion in annual cash generation.

While the business improves only slowly, foreign currency swings will probably push Coke's cash returns to shareholders lower this year. But income investors don't need to worry that their dividend is headed for its first pause in decades.

Management boosted the dividend by 8% this year after raising it by 9% in 2014 and by 10% in 2013. In announcing the 2015 hike, Coke's board of directors didn't mention earnings but pointed to Coke's "long-term cash flow" as powering the raise. That metric is still pointing higher, which suggests more raises on the way for this dividend aristocrat.