Looking for medical-device stocks with solid fundamentals and long-term growth drivers? Then train your eyes overseas. With apologies to Shakespeare, the world is the medical-device industry's new oyster.

While the U.S. has been the sector's traditional stronghold, life stateside has become tough for this industry. Pricing pressures from cost-conscious U.S. hospitals have slammed sales, and the controversial 2.3% medical-device tax has taken a nasty bite out of profits.

Look overseas and the picture changes. Shockingly. Let's dive into two stocks, Medtronic (NYSE:MDT) and Edwards Lifesciences (NYSE:EW), that are kicking it overseas. Either or both could provide the best bets for investors interested in this sector. 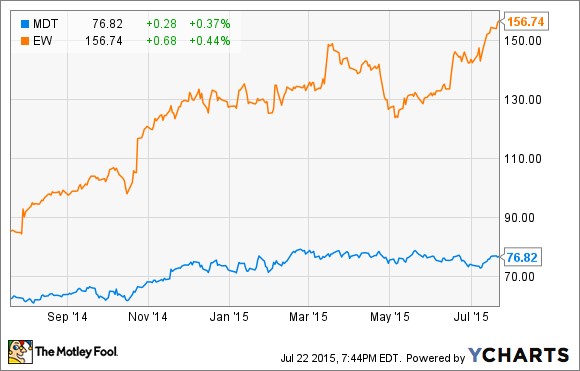 Medtronic is dancing an Irish jig in... China?
Revenue from the emerging-market countries, such as China, are now the fastest-growing segment of stalwart American company Medtronic's sales. International sales were 44% of total revenue for the device giant last quarter, driven by 12% year-over-year growth in emerging markets.

Add in the company's purchase of Irish hospital-supply company Covidien, and the link to emerging markets gets even tighter. As Foolish contributors Dan Carroll and Todd Campbell have both pointed out, the acquisition of Covidien was about finding a window on new growth opportunities, particularly overseas.

Medtronic CEO Omar Ishrak recently predicted that sales in emerging markets would grow at double-digit rates for years to come, reaching about $7 billion within five years. Overall, the merger will create a med-tech company with roughly $4 billion in emerging-market sales, with those sales growing at a mid-double-digit clip.

On the flip side, before the merger, Medtronic's overall year-over-year growth rates have been anemic -- in the mid-single digits. Still, this dividend aristocrat has increased its payout for over 35 years. The dividend even got a nifty 25% increase last quarter, bringing the yield to 1%.

In addition to furthering its growth opportunities, the deal with Covidien should allow Medtronic to keep up on its yearly dividend increases for the foreseeable future. During the most recent quarter, the first in which Covidien's revenue was included in Medtronic sales, the combined company recorded $7.3 billion in revenue. That total represented a 60% increase from what Medtronic alone earned in the same quarter last year. It was also about $220 million better than analysts had forecast.

Edwards' heart is beating faster
Starting with the first successful heart-valve transplant in 1960, Edwards LifeSciences has grown into an formidable medical-device company, with $2.3 billion in revenue last year, up 14% over the earlier year.

But while Edwards remains the king of valves implanted through cracking open chests, it's the company's new catheter-implanted heart valve that should make investors' hearts beat faster.

The numbers are impressive. In the first quarter, sales of the new trans-catheter heart valve jumped 42% from a year earlier, to $268.5 million. Driven by its new Sapien device, overall sales grew 13% to $590.3 million, and earnings climbed 47% to $1.12 per share.

Industry experts have touted trans-catheter heart valves as the fastest-growing technology in medical devices. I haven't seen reliable statistics to back that claim up, but in the EU, the number of procedures with the valve has continued to grow around 30% a year even though the devices have been available for eight years, according to Edwards CEO Michael Mussallem. The company anticipates the global market to exceed $3 billion by 2019.

While currency could pose a headwind in 2015,  management said foreign exchange hedging contracts have been signed to protect margins. Last quarter, Edwards' gross profit margin got an apparent boost from these contracts, to an impressive 77% .

In addition, several big legs up in growth should be ahead for Edwards. The company is already planning for next-generation Sapien devices, and a big catalyst to look out for is Sapien 3's approval for intermediate-risk patients, which could come next year. (The device was approved in June for extreme-risk patients in the U.S., six months ahead of schedule.)

The intermediate-risk market is two times the size of the extreme-risk market, and Edwards is expanding into mitral valves. Edwards recently scooped up CardiAQ Valve Technologies for $400 million to get its hands on its groundbreaking trans-catheter mitral valve replacement system.

Headwinds from the Obamacare tax?
Could further good news be coming for this sector?

It's possible. In mid-June the House passed a repeal of Obamacare's 2.3% federal excise tax on medical-device makers. The bill still needs a two-thirds majority in the Senate to overcome President Obama's promised veto.

I give passage slim odds of happening this year. But it's not off the table in the future. Meanwhile, there should be plenty of international opportunities for these stocks to reel in more growth. As these companies continue to beef up their innovative efforts, they're prying open the world's bivalve. The pearl of solid gains could well be their shareholders' reward.