Please ensure Javascript is enabled for purposes of website accessibility
Free Article Join Over 1 Million Premium Members And Get More In-Depth Stock Guidance and Research
By Leo Sun - Jul 28, 2015 at 9:00AM

Mac sales have risen and iPad sales have declined for six consecutive quarters.

Many Apple ( AAPL 2.28% ) investors focus on one number -- iPhone sales -- during its earnings reports. That certainly makes sense, since iPhone revenue accounted for 63% of its top line last quarter.

However, investors should also pay attention to sales of Macs and iPads. For six consecutive quarters, Mac sales rose annually as iPad sales declined. Why are sales of these two product lines diverging, and what does it mean for Apple's future?

Why Mac sales are rising
Last quarter, Mac unit sales and revenue both rose 9% annually, accounting for 12% of Apple's top line. While that represents a slowdown from the 18% unit growth and 13% revenue growth from the prior year quarter, it maintains its current course of annual growth: 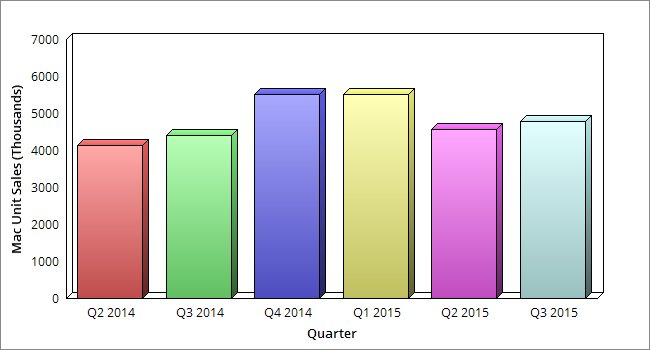 What's impressive about that growth is that it sidestepped a slowdown across the entire PC market. In early July, research firm IDC reported that worldwide PC shipments fell 11.8% annually during the second quarter due to price hikes caused by a strong dollar and a lack of major catalysts ahead of Microsoft's ( MSFT 0.01% ) Windows 10 launch.

IDC's numbers also revealed that during that quarter, only two leading PC vendors posted positive growth in the U.S. -- Apple, with 11.9% growth, and Lenovo, with 8.8% growth. That robust growth helped Apple overtake Lenovo as the third largest PC vendor in the country after Hewlett-Packard and Dell. During Apple's third quarter conference call, CEO Tim Cook noted that the new Macbook, which starts at $1,299, enjoyed a "very strong consumer reception" during the quarter.

Apple's PC business is growing because it doesn't race Windows-based rivals to the bottom of a crowded market, according to IDC. Moreover, Macs share two core strengths with iPhones -- premium appeal and a closed digital ecosystem. By designing and branding Macs as luxury products, Apple can sell mid-range hardware at premium prices. Since only Apple sells OS X PCs, it doesn't compete against cheaper devices running the same OS. Furthermore, keeping OS X and iOS X in separate ecosystems prevents one line from cannibalizing the other, as Windows tablets/hybrids have done to PCs.

Why iPad sales are declining
Last quarter, iPad unit sales fell 18% annually as revenue declined 23%, accounting for just 9% of Apple's top line. Back when iPad sales peaked in the first quarter of 2014, the product line accounted for 20% of Apple's revenue. 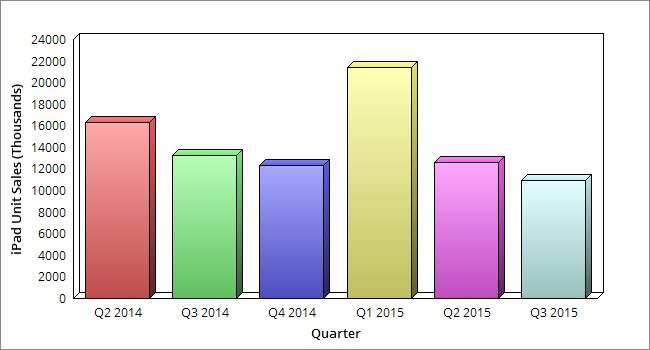 It's not just Apple that's struggling in the tablet market -- IDC expects global shipments of all tablets and 2-in-1 devices to slip 3.8% annually in 2015 after several years of positive growth. That decline is attributed to long upgrade cycles, the commoditization of the tablet market, and the rising popularity of phablets like the iPhone 6 Plus.

Despite those weaknesses, Tim Cook insisted that he was "still bullish on iPad" during Apple's conference call. Cook stated that IBM's new enterprise apps for iPads could appeal to businesses, and consumer upgrades will "eventually occur". Apple could also challenge Microsoft and its Windows allies in the enterprise market with the long-rumored iPad Pro, a 12" or 13" tablet for business users.

Two things could happen to the iPad in the future. On one hand, it could be cannibalized by newer devices, just like the iPod. But on the other hand, users clinging to old iPads could finally upgrade their devices, and enterprise support might revive sales. According to a recent ChangeWave survey cited during Apple's conference call, 50% of respondents planning to buy a tablet within the next 90 days would choose an iPad. Among corporate customers, that percentage rises to 70%. Those estimates are encouraging, but it's unclear if they'll translate into actual sales.

Why should investors care?
Although the Mac and iPad aren't as important to Apple's growth as the iPhone, both product lines play crucial roles in diversifying the company's business away from the almighty iPhone. That's why investors should hope that Mac sales keep climbing, and that the iPad doesn't fade away like the iPod.