Please ensure Javascript is enabled for purposes of website accessibility
Log In Help Join The Motley Fool
Free Article Join Over 1 Million Premium Members And Get More In-Depth Stock Guidance and Research
By Brian Feroldi - Jul 29, 2015 at 8:39AM

Originally set out to treat the hepatitis C market, Vertex has successfully pivoted its focus to the cystic fibrosis market instead, where it looks poised for strong growth.

Look at a long-term chart for Vertex Pharmaceuticals (NASDAQ: VRTX) stock, and you'll see one heck of a wild ride. Investors who got in at the initial public offering are up more than 20-fold, crushing the market's return, yet they had to endure some gut-wrenching volatility along the way. Hidden in Vertex's unique history is a valuable lesson that I believe all investors can learn from. So what's been the secret to its success, and what lessons can Vertex's history teach investors today? 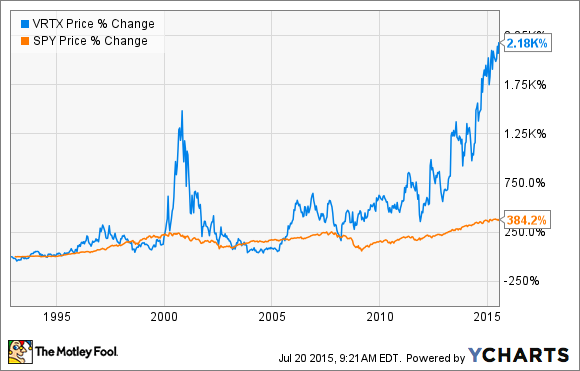 The rocky road to multibagger returns
Founded in 1989, Vertex began as a company focused on creating products to treat the HIV and hepatitis C markets. The company proved successful and in 2011 launched its first medicine, Incivek, as a treatment for hepatitis C. Incivek launched with huge success, growing so quickly out of the gate that it became the fastest drug launch ever. Revenue for Incivek reached nearly $1 billion in its first year on the market, allowing Vertex to generate a profit for the first time ever.

However, Incivek's market success proved to be very short lived, as only a few years after it hit pharmacy shelves, Gilead Sciences launched its own hepatitis C treatment, Sovaldi, and quickly took over the market. Sovaldi showed clinical superiority, as it cured 90% of patients with hepatitis C, causing Incivek sales to plummet. Facing a huge decline in demand and an inability to compete with Sovaldi, Incivek appeared to have a grim future, and Vertex's management called it quits and stopped selling the drug in 2014.

Rare disease opportunity
While Incivek's market failure was a huge blow to the company, Vertex wasn't betting its entire future on the success of that drug alone. In 2007, the company began to diversify its research efforts and set its sights on treatment options for patients with cystic fibrosis. CF is a rare, life-threatening genetic disease that causes the body to produce a thick mucus in the lungs, leading to clogs and infections. Very few treatments existed for patients with cystic fibrosis when Vertex began its research, leaving a huge unmet medical need for roughly 70,000 patients worldwide.

The decision to diversify its research proved to be a smart one, and in 2012 Vertex received FDA approval for Kalydeco, its first CF drug. Kalydeco was initially approved as a treatment option for only about 1,200 of the 30,000 CF patients in the U.S., as the drug was only studied in CF patients who had a very specific mutation. Over time, Vertex has successfully expanded the number of CF mutations that Kalydeco has been approved to treat, and the current addressable market in the U.S. has grown to roughly 3,400 patients.

Despite the small number of patients Kalydeco can treat, the drug has proved to be a big success for Vertex. Kalydeco has orphan drug status, which the FDA defines as a drug that treats a disease that affects fewer than 200,000 people stateside. Being labelled an orphan drug allows Vertex to charge huge prices, and using Kalydeco currently costs more than $300,000 per year.

This huge price tag has allowed Vertex to grow revenue quickly since launch, and sales of Kalydeco are expected to land between $560 million and $580 million for 2015. The midpoint of this range represents a strong 23% growth over the $463 million produced in 2014.

Vertex's secret to success
The lesson investors can take away from Vertex's success is telling: Diversification is extremely important. Had Vertex's entire future been tied only to the success of Incivek, the company's future would have been grim. Vertex was saved by its strategy of having multiple irons in the fire, and it was able to successfully pivot its business away from reliance on Incivek alone because of the years it spent researching CF treatments, long before the company knew Sovaldi was going to render Incivek obsolete.

Huge opportunity ahead
Vertex investors got some terrific news recently, as earlier this month the FDA gave the nod to Orkambi, a new combination therapy for treating CF. The market for Orkambi is approximately 8,500 patients in the U.S., which is a much larger addressable market than Kalydeco is currently approved to treat, and it therefore represents a huge opportunity for Vertex.

Like Kalydeco, Orkambi has orphan drug status, which again allows Vertex to charge a huge price. With an estimated annual cost for Orkambi at $259,000 per patient, analysts are predicting peak sales north of $5 billion.

A pipeline of future optionality
CF appears to be a great area of opportunity to revolutionize treatment, and Vertex continues to invest accordingly. Beyond Orkambi, Vertex has another combination drug called VX-661 in its pipeline that's currently in phase 3 trials.

Vertex is also looking to other disease states such as oncology and influenza as potential market opportunities, and it boasts three products in phase 1 or phase 2 development. While it will be years before Vertex will see any revenue from these potential drugs, it certainly is nice to see the company continue with its successful strategy of diversification to help create future revenue streams.

Lesson learned
Vertex's history teaches a good lesson that all investors can learn from: No matter how promising a company or product looks, the future is always unknown, and diversification can help protect you from threats you can't even see. That's actually a big reason I prefer to keep my biotech investments in the blue-chip players which have multiple product lines and are investing aggressively in research and development efforts beyond their core franchises. The most successful large biotechs are less threatened from the risk of any one product being rendered obsolete by the approval of a competing product, and so these companies come with built-in diversification protection.

The next time you're looking to put money to work, remember the lessons that Vertex's history can teach us on the importance of diversification. Looking out for companies with multiple avenues for growth is a solid strategy for long-term success.