It hasn't been a good year for chip maker Intel Corporation (NASDAQ:INTC). Shares of Intel, the largest semiconductor company in the world, have lost nearly 20% of their value year to date. There are many factors for this, including the declining personal computer industry, and Intel's lack of more meaningful progress in its key growth businesses.

On July 14, investment firm Bernstein Research cut Intel to under-perform from market perform, and reduced its price target from $29 per share to $25 per share. A price target is an analyst's expectation of a stock price in the future. The research note was striking in a number of ways.

First, the Bernstein analysts are in the minority among analysts currently covering Intel, who are predominantly bullish on the stock. In fact, of the 46 analysts that held a rating on Intel as of last month, 39 rated the stock either a hold, buy, or strong buy.

In addition, it's slightly confusing to see this downgrade come out on July 14, when the stock closed the prior day at $29.73. a day. It would have been far more productive for investors if the analysts had downgraded Intel weeks ago, when the stock was trading well north of $30 per share.

Nevertheless, the downgrade from Bernstein is based on a few key issues. First and foremost is the continued weakness in the personal computer market. PC sales are in steep decline this year. Technology research companies IDC and Gartner found that second-quarter global PC shipments fell 9% and 11%, respectively, which would represent the steepest quarterly decline in two years. This is a significant concern because this division accounts for more than half of Intel's total revenue.

Quarterly earnings didn't help Intel's case
The analyst's pessimism was backed up by Intel's second-quarter earnings report, which came out the day after the downgrade and left a lot to be desired. At first glance, Intel's report actually looked good, because the company beat analyst expectations on earnings per share. Revenue clocked in at $13.2 billion, which met analyst expectations, while EPS of $0.55 per share easily beat estimates, which called for $0.50 per share.

However, upon looking closer, there were several red flags. First, on a year-over-year basis, revenue declined 5%, and EPS was flat. Also, Intel lowered its forecast for the full year. It now expects revenue to decline 1% in 2015 versus its previous guidance for flat revenue.

Intel's weak earnings report made the downgrade by Bernstein look like a very prescient call. Intel's core business did not perform very well. Revenue in the Client Computing group, which includes both the PC business and the mobile business, fell 14% last quarter, year over year.

The reason why Intel beat EPS forecasts was largely due to a favorable tax rate. Intel's tax rate of 9.3% was nearly 20 percentage points lower than the same quarter last year.

A cheap stock may not be good enough
Investors may be attracted to Intel right now because the stock is significantly cheaper than the market as a whole. Indeed, Intel stock changes hands for only about 12 times trailing earnings per share. But as you can see from the following chart, Intel has been even cheaper before on a P/E basis. 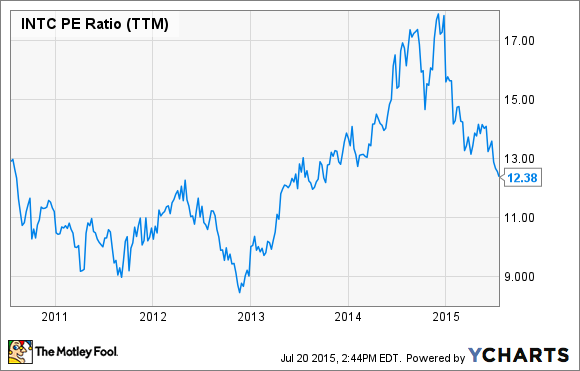 The company is counting on some product developments to drive growth going forward, like the Skylake processor, which should ramp up production for PC use during the second half of the year. But this won't help much if consumers and businesses continue to hold off on buying PCs.