Houston-based Ultra Petroleum (OTC:UPL) reported adjusted earnings of $0.21 per share for the second quarter, beating consensus analyst estimates by $0.02 per share. The natural gas producer rode on efficiency gains by reducing service costs and lived up to its billing of being a low-cost natural gas producer. However, high interest expenses coupled with the depressing market conditions for natural gas proved to be a bigger blow as the company recorded a net loss of $24.6 million.

Challenging market conditions slam financials
Realized natural gas prices, thanks to hedging, stood at $3.33 per thousand cubic feet, or Mcf, sliding from $3.61 per Mcf in the year-ago quarter. However, if hedging is excluded, average prices slid a horrifying 41% to a paltry $2.52 per Mcf. As a result, an unrealized loss of $56 million in commodity derivatives ate into profits.

Total revenue came in at $208 million, a 30% drop from last year. That, however, masks total production growth of 20% to 70.5 billion cubic feet equivalent, or Bcfe. This is definitely a solid jump considering the challenging market conditions. The following table gives a breakup of production growth for natural gas and crude oil individually.

From the above chart, we see that natural gas alone constituted 92.3% of total production with the rest being crude oil.

Core operations remain successful
Ultra Petroleum's core acreage in Wyoming yielded 65.8 Bcfe, or 93% of the total production. In the Pinedale oil field, the company drilled 36 net wells with new production commencing in 34 wells. This is clearly a decent jump from the first quarter's 30 and 29 net wells, respectively. Behind this is a 12% reduction in average well cost from $3.45 million per well in the first quarter to $3.10 per well in the second. Apart from that, rig release-to-rig release was somewhat unchanged at a little above 11 days.

In the words of management, "approximately 33% of the cost savings is related to productivity improvements and 67% is due to service cost reductions." These efficiencies mean a lot to low-cost natural gas producers like Ultra Petroleum. For the second half of the year, management is aiming to drill each new well for less than $3.0 million, so that average well costs for 2015 will meet the targeted $3.3 million. If tracked back to the year 2006, management has so far managed to cut well costs in the Pinedale field by a massive 51% -- by no means a small feat! The following chart shows how management could achieve this by optimizing well designs and introducing newer technologies. 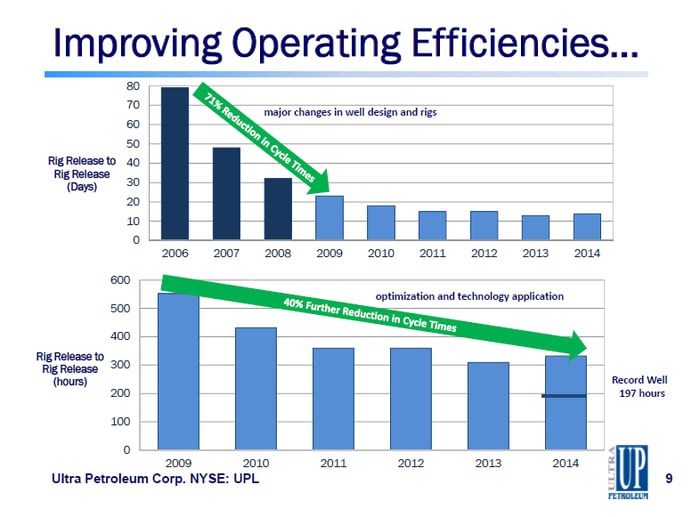 Expect more economic production
Even now, less than 35% of the company's Wyoming acreage has been developed so far. That means these long-lasting reserves should hand Ultra Petroleum a massive advantage in terms of expertise and proprietary knowhow of the field dynamics. Gross margins have considerably improved in 2015.

Operating cash flow came in at $121.8 million and $233 million for the second quarter and first half of 2015, respectively. That is a 16% and 33% drop, respectively, from last year's numbers. As long as oil and gas prices remain in the doldrums, there isn't much the company could do. The company increased its budgeted spending from $460 million to $500 million for 2015.

Foolish takeaway
The million-dollar question, therefore, is: Can operating cash flows cover capital spending this year? It would be a close call. Management says the reason behind the increased spending is that it wants to drill an additional 27 wells over the earlier target of 111 wells for 2015. In other words, the extra $40 million should bring 27 more wells online at an average $1.48 million per additional well, which isn't exactly a bad idea from an economic standpoint. Probably the revised targets would ensure the above conundrum is solved.