Early Friday morning, American Airlines (NASDAQ:AAL) shares looked set to have a good day after the company reported a solid Q2 profit and doubled its share repurchase authorization to $4 billion. But during the company's earnings call, American's management dropped a bombshell, telling investors that unit revenue may continue to decline until the second half of 2016.

That unwelcome revelation helped drive the stock down 7% for the day, ending the week at less than $40. While American Airlines shares have regained some ground since then, they still remain about 27% below the all-time high set just a few months ago. 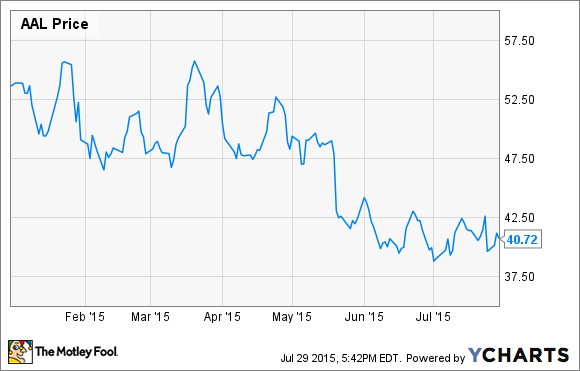 Yet I remain very bullish on American Airlines stock despite the outlook for fairly weak revenue performance over the next year. The stock trades at a bargain valuation, and the company should be able to maintain a high profit margin next year thanks to improved cost performance.

Facing bigger unit revenue headwinds than peers
American's unit revenue guidance came as a shock to many investors because rivals like Delta Air Lines (NYSE:DAL) have offered much better forecasts. Earlier this month, Delta's management told investors that unit revenue was likely to get back to the flat line -- if not positive territory -- by the end of the year.

To achieve this performance, Delta Air Lines has scheduled significant capacity cuts on weaker international routes beginning this fall. The biggest cuts are occurring in Japan, where Delta has historically operated an international hub in Tokyo.

But American Airlines faces bigger headwinds than Delta. It faces elevated competition in two of its key hub markets: Dallas and Chicago. It also has by far the biggest exposure to Brazil of any U.S. carrier. Economic weakness and a plunging currency there have driven a sharp contraction in air travel demand that American hasn't been able to offset despite slashing its capacity.

On the other hand, American Airlines plans to complete the biggest step of its integration with US Airways in October by merging reservations systems. That will allow the company to better hone its capacity deployment and revenue management, driving revenue synergies starting next year.

The key point is that American Airlines has clear unit revenue catalysts ahead. This, combined with the impact of easier comparisons, means that the company should be able to hit management's guidance for a return to unit revenue growth by the second half of 2016. Unit revenue isn't likely to keep falling indefinitely.

Nonfuel cost trends will improve
In 2015, American Airlines has benefited enormously from low oil prices. The company is on pace to save more than $1/gallon compared to its average jet fuel price of $2.91/gallon last year. That will translate to year-over-year cost savings of about $5 billion.

That was a lucky break because otherwise the company would have been hard-pressed to maintain -- let alone grow -- its earnings this year. Not only has unit revenue plunged this year, but nonfuel unit costs are expected to rise 4%-6% for the full year for American's mainline operations.

While American Airlines is still working on new joint contracts with some of its other labor groups, such as its mechanics and dispatchers, those cost increases will be a fraction of the nearly $850 million headwind the company has faced this year. More subdued labor cost increases -- offset by productivity improvements -- will enable much better cost performance in 2016.

Furthermore, American Airlines is spending extra on increased staffing this fall to ensure a smooth reservation system integration. If all goes as planned, it will be able to remove those costs next year, adding another nonfuel cost tailwind.

Finally, American Airlines will continue its major fleet overhaul. It is rapidly retiring its old 757s and MD-80s in favor of new aircraft that offer significant unit cost benefits. It is also fitting more seats on some existing aircraft to reduce unit costs.

What it means for 2016
While American Airlines' unit revenue is expected to continue falling in the first half of 2016, the declines should be more moderate than what the carrier is currently experiencing. Meanwhile, American may be able to hold its nonfuel unit costs flat, in contrast to the rapid cost inflation of 2015.

Assuming oil prices don't spike again -- which is certainly not guaranteed -- American Airlines should be able to maintain a very strong profit margin in the first half of 2016. And if unit revenue starts to grow again in the second half of the year, that could drive a return to profit growth.

American Airlines stock trades for less than 5 times projected 2015 pretax earnings. That low valuation implies that investors doubt that the company can sustain profitability anywhere close to this level.

But based on the current outlook for unit revenue, nonfuel unit costs, fuel prices, and fuel efficiency gains, American Airlines should be able to avoid a steep decline in profitability. That, along with the company's big share buyback plan, could get the stock back on track.