A strong quarter despite an empty release schedule
As a video game publisher, Electronic Arts depends on the sale of its games to drive its financial performance. But the majority of Electronic Arts' titles are released in the fall and winter; in the first quarter, Electronic Arts published no new games of note.

Still, it earned an adjusted $0.15 per share on adjusted net revenue of $693 million. Analysts had expected Electronic Arts to earn just $0.03 on revenue of around $652 million. Management cited demand for games released in prior periods, as well as revenue related to its digital services.

Given the lack of new titles in the first quarter, Electronic Arts focused on its upcoming slate. At the Electronic Entertainment Expo (E3) in June, Electronic Arts' upcoming games won a combined 132 awards. Although these rewards mean little in terms of financial performance, they serve to underscore the relative strength of the company's pipeline.

But EA's outlook falls short
Thursday's sell-off was likely fueled by Electronic Arts' outlook. Although it raised its full-year guidance, it still fell short of what analysts had been anticipating.

In recent quarters, Electronic Arts has been one of the best-performing tech stocks. Shares of the video game giant are up better than 100% in the last 12 months. The rally has been fueled by a steady stream of better-than-expected earnings reports -- in January, and again in May, shares surged following the release of quarterly results that exceeded expectations. 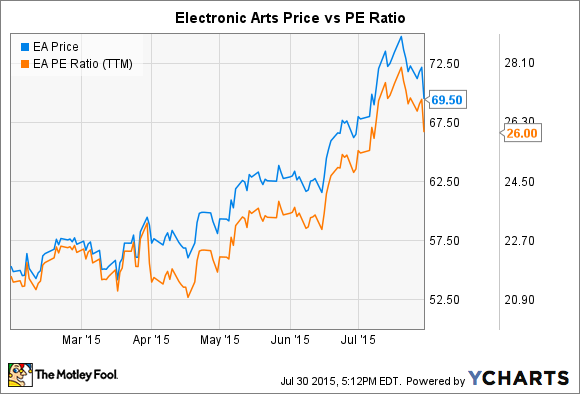 Demand for next-generation consoles has been strong, and Electronic Arts' multiple has risen along with its stock. With a trailing price-to-earnings ratio near 26, investors appear to be expecting strong growth.

The sell-off is a minor speed bump for longer-term shareholders, but not particularly surprising. Electronic Arts' business continues to perform, but given its valuation, any doubts about its future prospects will likely weigh on its shares.