3D Systems (NYSE:DDD) is slated to report its second-quarter earnings on Thursday before the market opens. Going into the release, Wall Street expects 3D Systems to grow its sales by about 15% year over year to $173.7 million and take home $0.09 per share in adjusted earnings.

Beyond the headlines, investors should also familiarize themselves with the fundamental drivers of 3D Systems' business to help determine if the long-term investment thesis remains intact. In total, there are three major areas for investors to watch when 3D Systems reports earnings. 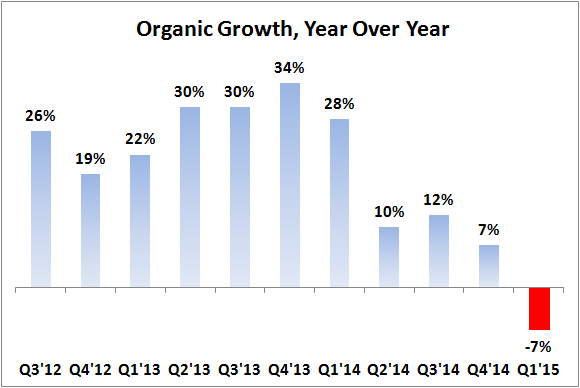 Throughout 2014, 3D Systems experienced numerous execution issues across its product portfolio, all of which seemed to have come at the expense of the company's organic growth rate. Consequently, a major question for investors is whether 3D Systems can improve the performance of its existing operations and return to delivering healthier levels of organic growth.

2. The demand picture
3D Systems' first-quarter earnings was chock-full of woes, including strong currency headwinds, demand problems from its aerospace, automotive, and healthcare customers, and performance issues related to some of its metal and nylon 3-D printers. The results caused enough uncertainty for management to withdraw its full-year guidance -- a proverbial sin in Wall Street's house of high-growth investing.

To make matters more troubling, 3D Systems' backlog declined by 19% sequentially to $37.8 million, suggesting that future demand for its 3-D printing products may be under pressure.

At the end of the day, real concerns exist about demand for 3D Systems' printers. It's all but certain this issue will be raised on the earnings call.

3. Material sales
A major bullish argument for owning 3D Systems over the long haul is its potential to generate high-margin recurring revenue streams from the repeated sale of materials that are consumed during its printers' lifecycle. The idea is that high-margin material sales will eventually flow through to the bottom line as earnings grow, once 3D Systems slows down its pace of investment.

In a perfect world, 3D Systems investors want to see its material revenues increase when its installed base grows and printers are being used more frequently. Unfortunately, 3D Systems' material sales declined by 8% year over year on the first quarter, due to slower-than-expected unit growth and reduced utilization. The latter -- reduced utilization -- suggests that 3D Systems' customers are taking pause with how often they're 3-D printing objects, which doesn't necessarily bode well for its razor-and-blade business model.

Of course, one negative data point isn't enough to call this cause for concern a trend, but it's enough to warrant investors to focus on how material sales fared in the second quarter.

All eyes on Thursday
With nearly 35% of 3D Systems' shares outstanding being actively sold short, there isn't a lot of enthusiasm toward the company's growth prospects.

Ultimately, when 3D Systems reports earnings on Thursday, focus on how the underlying business is performing, rather than how investors react to the news. Keying in on 3D Systems' organic growth rate, the macroeconomic environment, and its materials sales, are great avenues in helping determine whether the once-beloved 3D printing giant deserves a shot at redemption.