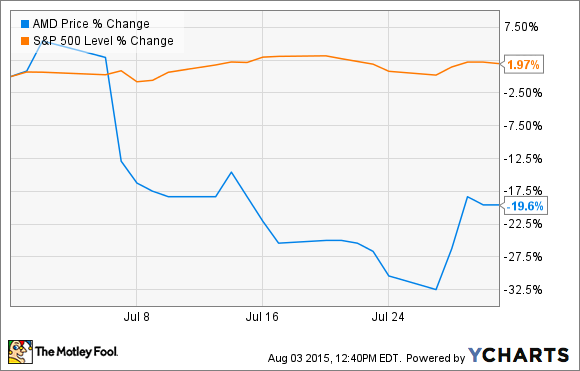 What: Shares of Advanced Micro Devices (NASDAQ:AMD) plunged 19.6% in July, according to data from S&P Capital IQ. The stock surged 16% higher during the last week of the month, but that wasn't anywhere near enough to erase the memories of a terrible earnings report.

So what: The earnings-related plunge came in several stages. First, AMD shares dropped as much as 8.1% near the end of June, when memory chip company Micron Technology revealed horribly low demand for PC system components. Then, AMD lowered its own sales guidance in the early days of July, also pointing to weak sales from PC system builders. The stock fell another 18%. Finally, the company reported final second-quarter results, reminding investors just how bad the quarter was. Shares fell another 4%, even though most of the bad news had already been unveiled.

Now what: The 16% surge at the end of July came on no news at all, and may have been a simple case of short-sellers taking their profits and going home. The stock bounced off 52-week and all-time lows, some 63% below the stock's 52-week highs.

AMD is looking for a way out of the crumbling PC components market, looking for opportunities to sell its semi-custom processors into new sectors such as consumer electronics and the Internet of Things. Investors and some analysts worry that AMD might not complete its strategy makeover before running out of cash, putting the stock in real danger of becoming completely worthless.

At current prices, AMD presents a classic high-risk, high-reward opportunity. The stock could bounce sky-high with a successful non-PC revamp -- or die trying. Today, it's not at all obvious where AMD's stock will end up.

In July, plenty of investors took the pessimistic view of AMD's prospects. Keep a close eye on PC sales for clues on where the stock is going next, and don't forget to weigh AMD's semi-custom chip sales against the company's remaining cash reserves.