By all accounts, oil and gas companies that work in the midstream space doing the unheralded work of moving oil and gas to market are normally insulated from oil and gas prices. Looking at what has happened to shares of Targa Resource Partners (NYSE: NGLS) and its general partner, Targa Resources Corp. (NYSE:TRGP), so far this year, though, it appears that insulation wasn't that great as shares have declined rather precipitously since oil prices started to crash. 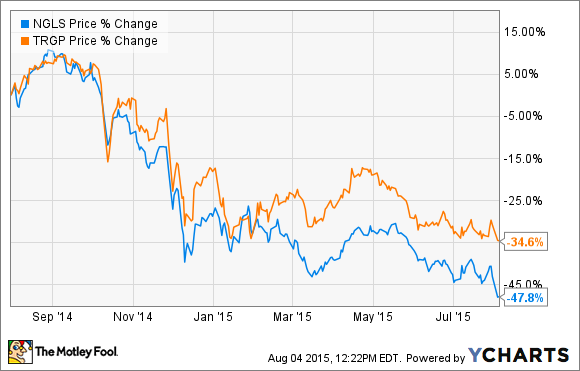 Based on the company's most recent earnings report, it's very possible that this sell-off has been a bit overdone. Here are three key facts you should know about Targa Resources' most recent quarter.

1. Earnings were a mixed bag, but don't look into it too much
Depending on which analyst you ask, earnings for Targa Resources Partners (at $0.01 per share) and Targa Resources Corp. (at $0.27 per share) beat or missed earnings expectations. In reality, though, these things are not of much consequence -- and it kind of highlights the silliness of basing success on earnings expectations in the first place. The biggest reason for this is that Targa Resource Partners is a master limited partnership and therefore earnings are much less important as distributable cash flow. In that regard, Targa did quite well.

So don't spend too long scratching your head over what the company's earnings mean. If you focus on what happened with dsitributable cash flow, you will get a much better picture of what is going on at the company long term.

2. The Atlas Pipeline acquisition is working nicely so far.
Last quarter, Targa Resources gave us a slight hint as to what the fully merged company would look like by offering pro forma earnings, but this quarter we finally got to see the results of the combined company shine. Despite declines in price realizations in several business segments, the 195% increase in natural gas plant intake in the company's field gathering segment -- where all of Atlas' assets are counted -- more than made up for it on its overall gross margin. 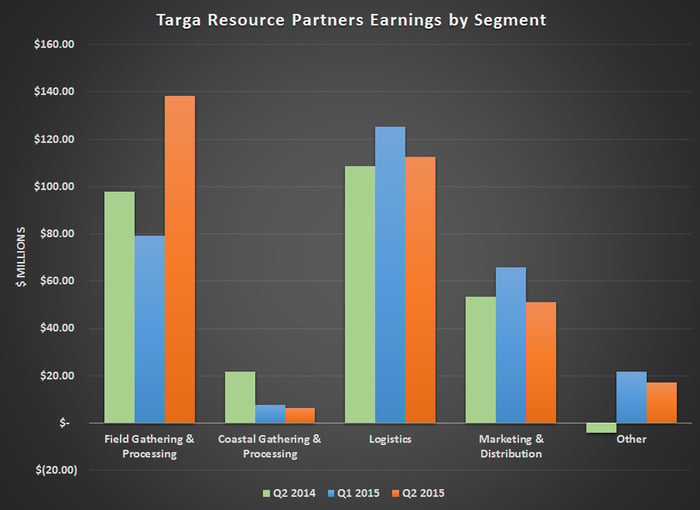 What is even more encouraging for the general partner is that it is achieving these results while specifically lowering its incentive distribution rights to make the Atlas merger possible. In 2015, the general partner is providing the limited partnership $37.5 million in IDR subsidies. As these subsidies decline over time -- $20 million in 2016, $10 million in 2017, $5 million in 2018 -- it will boost Targa Resources Corp.'s cash flow significantly and provide it with a means to steadily grow its dividend over the next several years.

What a Fool believes
Targa Resources is a slightly riskier investment in the midstream oil and gas industry because a smaller percentage of its gross margin is generated by fixed fees, which puts the two entities at slightly higher exposure to commodity risk than some of its peers. However, thanks to the Atlas merger, it has been able to offset much of the weakness in prices for the time being. As prices hopefully recover, Targa looks to be in a decent position to beat expectations.