Eaton Corp. plc (NYSE:ETN) reported earnings $1.16 a share, excluding $0.02 in merger costs, in the second quarter, up 5% year over year and $0.03 above consensus estimates. However, the company missed top-line expectations. That revenue weakness led it to announce a $145 million restructuring program to "reset" costs.

Good results, weakening markets
Overall, Eaton put up a solid bottom-line number despite sales weakness. In fact, the year-over-year top-line gain of 5% is pretty impressive, given the 7% sales decline. That said, currency headwinds had a big impact on the quarter, pushing the top line down 6% -- which, if pulled out, means organic sales fell just 1% overall. While that's not as bad as the headline number, it's still weak compared with recent quarters. Here's how the company's business segments performed this quarter compared to the same quarter last year

In fact, only two of the company's five main businesses eked out organic sales gains year over year. The standouts were electric products and automotive, while Electrical Systems and Hydraulics continued to be the real laggards. A severe pullback in agriculture markets around the globe and construction weakness in China are the main culprits behind the ongoing weakness in Hydraulics. It's worth noting, however, that taking one-time items out of the year-ago period in Aerospace would push that segment's organic revenue growth up to around 3% in the quarter, so that division is doing better than it at first appears.

Saving the bottom line was continued strength in margins, which were 15.8% in the quarter overall. That's an improvement of roughly 120 basis points over the previous year. Once again, however, this wasn't an across-the-board improvement, with Electrical Systems, Aerospace, and Automotive showing improvement and Electrical products and Hydraulics showing declines. On balance, then, Eaton had a solid earnings showing, but it was a mixed bag when you look at the underlying businesses.

Taking action
This helps explain why Eaton announced a $145 million restructuring effort to trim costs. The other big reason for the cost-cutting move is, perhaps, more concerning: It expects the slow growth environment in which it's operating to continue into next year. Thus, keeping costs down will be increasingly important going forward, particularly since management reduced its organic growth forecast to zero to 1% for the full year -- for reference, it started the year expecting organic growth of between 3% and 4%.

Restructuring costs will hit hardest in the third quarter, where $110 million will be spent. That will clearly have a notable impact on the bottom line. Eaton is calling for third-quarter earnings of between $1.00 and $1.10 a share, including the costs of the restructuring. Analysts had been calling for $1.30 a share. The fourth quarter will see $10 million in spending, with the remainder scheduled for 2016, so those periods won't be as heavily affected. 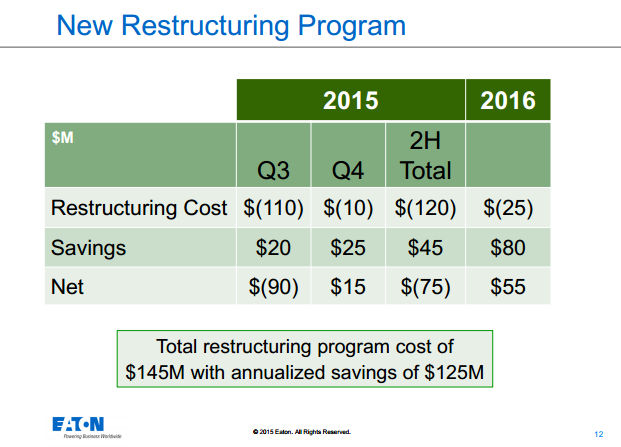 On its conference call, Eaton noted that the goal of these cost-cutting efforts are to achieve structural cost reduction, not to trim variable costs. As part of the process, the company will be eliminating positions, closing facilities, and consolidating internal organizations, among other things.

The hope is that this spending will lead to savings of $45 million in the second half of this year and an additional $80 million next year. Thus, Eaton is hoping to achieve annualized savings of around $125 million from this $145 million cost-cutting program, helping to protect margins. That's a nice return, if it can achieve it, so you'll want to watch this in the coming quarters -- keeping in mind the short-term impact it will have on bottom-line results.

Now it's a transition year
This really turns 2015 into something of a transition year for Eaton, though it didn't start out as one. For example, consensus estimates for the full year were around $4.75 a share. But because of the just-announced cost-cutting effort, Eaton is calling for full-year earnings to be in the range of $4.40 to $4.60 a share. That's not exactly a positive turn of events and helps explain why investors sold the shares off a couple of percent after earnings were announced.

In the end, though, there isn't much reason to expect the company's end markets to show notable improvement in the next few quarters. Eaton has the wherewithal to survive this soft patch and the tenacity to reshuffle its business to adjust to it. Expect third-quarter earnings to be particularly weak, and don't look for the middling operating environment to improve much from here over the next few quarters. That, of course, makes it all the more important to watch the success of Eaton's efforts to adjust its cost structure.