Please ensure Javascript is enabled for purposes of website accessibility
Log In Help Join The Motley Fool
Free Article Join Over 1 Million Premium Members And Get More In-Depth Stock Guidance and Research
By Matthew Frankel, CFP® - Aug 4, 2015 at 8:08AM

Investors may finally get some long-awaited answers about the GSE's conservatorship, thanks to Judge Margaret Sweeney.

Fannie Mae (FNMA 15.57%) and Freddie Mac (FMCC 9.23%) shareholders applauded Judge Margaret Sweeney's recent ruling, which ordered the U.S. Treasury to release all documents it has that are related to the agencies' conservatorship. While this is a victory for shareholders, as it could bolster their case that the current profit-diverting arrangement should be changed, this was just one small piece of the puzzle. Here's a rundown of the latest developments, and why shareholders shouldn't get too excited ... yet.

The Fannie and Freddie drama: The quick version
Fannie Mae and Freddie Mac shareholders are unhappy with the current profit-distribution arrangement, or lack thereof.

Originally, seemed from an outside observer's standpoint to be fair to both the government and the agencies themselves. It called for a 10% dividend on the senior preferred shares (the bailout), and anything the Treasury received beyond that 10% would be used to pay down the $187 billion principle. However, this was before the agencies were earning billions of dollars.

Under the terms of an amended agreement -- which coincidentally (or not) occurred just before the agencies returned to material profitability -- 100% of the profits are diverted directly to the Treasury. To make it worse, the profits are considered dividends no matter how big they are, and have no impact on the outstanding principle.

Shareholders are upset about this. The agencies have thus far paid the government $43.4 billion more than they received, and shareholders who held onto their shares while the agencies were left for dead feel this is enough and that they deserve some of the profits. Plus, mortgage delinquencies have fallen dramatically over the past several years, and shareholders argue that Fannie and Freddie could function as independent entities if allowed to recapitalize.

Of course, this is a quick version of the shareholders' position, and there are several other valid arguments of why the current arrangement is unfair. The general point is that shareholders feel the government is illegally taking the profits from their investment, and they want this to change. They'll get their chance soon, as the lawsuits are set to be heard in court this fall.

The discovery ruling and what it could mean for the shareholders' lawsuits
Judge Sweeney ruled that the Treasury must make all documents related to the conservatorship of Fannie Mae and Freddie Mac available for discovery. The 10,000 plus pages of depositions, documentation, and other relevant material will be made available to the U.S. District Court as well as the U.S. District Court of Appeals in Washington, D.C.

Investors have been searching for answers to many questions, such as why the GSE's were placed into conservatorship in the first place. Attorneys for Fairholme have said the government is intentionally making it difficult to understand the events that led up to the controversial decision in 2012 to send all of Fannie and Freddie's profits to the Treasury's General Fund. Hopefully, this newly released documentation will answer this and other questions, which could help the shareholders make a much stronger case.

A long way to go
Analyst Richard Bove called the ruling a "big win" for Fairholme and all shareholders, and he's right. But it isn't as big of a development as it may seem.

For starters, the discovery ruling was expected. In a previous filing, Judge Sweeney made it clear where she stood on the issue:

"The evidence needed by plaintiffs to respond to defendant's jurisdictional allegations is within the hands of defendant, and otherwise not publicly available. Thus, plaintiffs are entitled to discovery on this issue."

More importantly, shareholders are still facing an uphill battle, and will still need to convince the courts that the current arrangement is illegal and should be changed. Bear in mind that a similar lawsuit has already been dismissed, although it was done by a different judge, and without the new discovery evidence.

An "interesting" risk-reward, but still a gamble
Hedge fund manager Bill Ackman, whose Pershing Square fund is the single largest holder of Fannie and Freddie common stock, has repeatedly said the GSEs are currently the most interesting investment from a risk-reward standpoint in the entire market. While Ackman acknowledges that there is certainly downside potential, he sees it as unlikely. In his words, "This cannot become a precedent where the U.S. government can come in and unilaterally take 100 percent of the profits of a private corporation forever."

It's hard to argue with the logic, and if Ackman and the rest of the plaintiffs are correct, there could be a huge payday ahead. According to an extensive and convincing analysis performed by Pershing Square, Fannie and Freddie's common shares could be worth between $23-$47 apiece if the agencies are allowed to recapitalize and operate as independent entities. 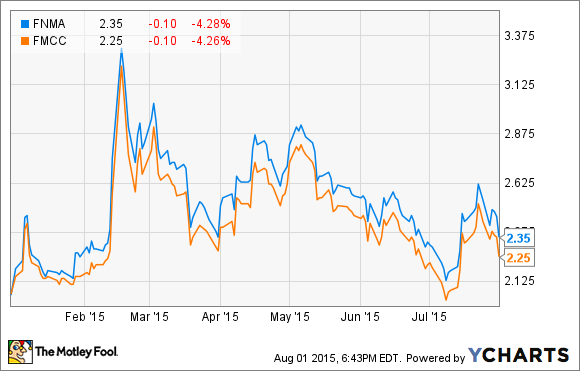 So, on the low end, we're talking about a tenfold increase in the current share price. Given the strength of the shareholders' argument and the judge's favorable ruling, I'd say the odds of a successful outcome have to be better than ten-to-one, but by how much is anyone's guess.

To sum it up, an investment in Fannie and Freddie is still like buying a lottery ticket and should not be done with any money that is needed for anything but pure speculation. However, the odds seem to have shifted, at least incrementally, in the investors' favor.