Here's a big-picture look at how the results compare to analysts' targets:

*Expected is the average forecast of the 18 analysts who cover the stock. Source: Yahoo! Finance and Hyatt's financial filing.

U.S. strength, overseas weakness
Revenue per available room, or RevPAR, rose by a solid 6% after excluding the negative impact of foreign currency swings. That's a slowdown from the first quarter's 7% improvement, but it still shows that Hyatt is at record occupancy rates and enjoys good pricing power. RevPAR for the full 2014 fiscal year was 5% and is running at a 6% pace through the first half of 2015, so Hyatt is still in accelerating growth mode.

Still, management is optimistic that the overseas business will improve over time. "Internationally, despite varied economic conditions, we believe that our brands will continue to resonate with owners and guests over the long-term," said CEO Mark Hoplamazian. 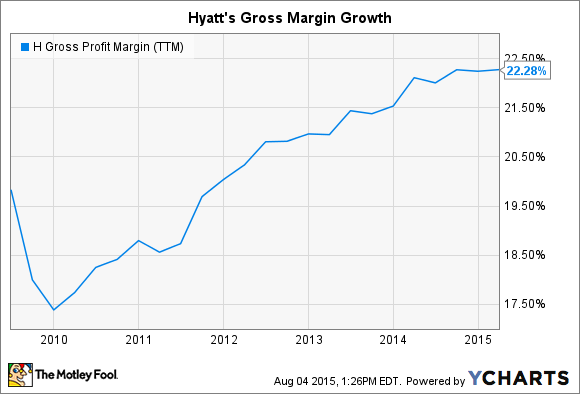 Looking ahead, the rest of the year's results will depend mostly on Hyatt's success at capturing growth in its U.S. business. An upswing in lodging demand amid an improving economy will help that cause. "We expect operating performance at our hotels in the United States to remain strong from continued economic growth and strong group trends," Hoplamazian said.

Hyatt also hopes to get a boost in the years ahead from an aggressive expansion strategy. Management is on track to open 50 hotels this year, for a 20% increase in its footprint. Meanwhile, competitors aren't moving to add supply nearly as quickly. That pause presents an opportunity that Hyatt hopes to seize by investing in growth in key markets around the world.